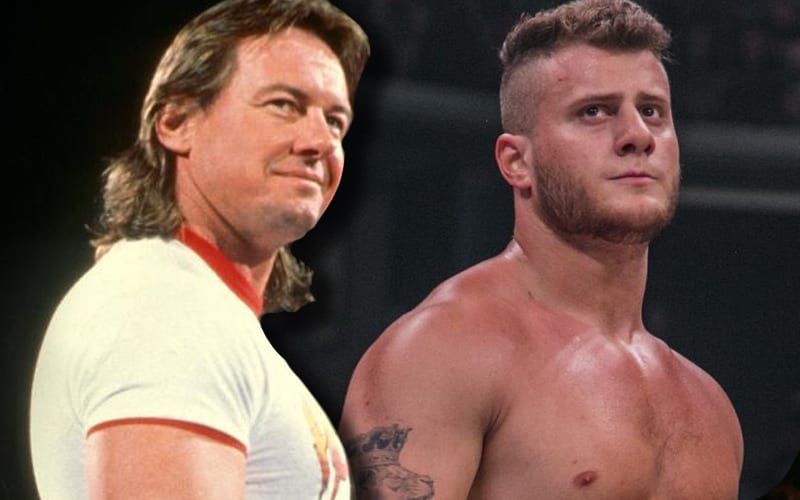 MJF is regarded as one of the best heels in the pro wrestling business and he goes to great lengths to protect his gimmick both inside and outside the squared circle. MJF is one of the biggest stars in AEW and it happened very quicky.

While speaking on the Talk Is Jericho podcast, MJF talked about his career in AEW. MJF admitted that he wasn’t well-known at all before making his way to the company. He also compared MJF to Kurt Angel in the past because of how quickly he has picked up on things.

He then compared his meteoric rise in the company to Kurt Angle’s first year in WWE, which is still regarded as one of the best rookie years for a pro wrestler.

“You can say he’s like a Roddy Piper, or he’s like a young Jericho. The point is he’s none of those things and all of those things. He reminds me a lot of Kurt Angle, and what I mean by that is he’s a guy that picked up wrestling so quick not just in the ring but character-wise. A lot of guys at 24 years old, which is I believe how old he is, doesn’t understand that character is the most important thing in wrestling. It’s more important than any move you can do and any match you can have, and Max gets that. Combine that with the fact I think he was a child actor. He was in musicals.”

“All the sort of things that you need to really expand on that character and he also doesn’t give a s**t. I mean, he will do anything to where we have to pull him back. You can’t yell at the five-year-old kid at the signing and make him cry. That’s not what you need to do. He comes up with a lot of ideas, and sometimes he’ll put ideas in my face where I’m like, ‘Dude, this isn’t good. The answer is no, but the answer is yes for this, this and this.’ I’m trying to kind of teach him more about storytelling, but all of the attributes he has at such a young age and that’s also why I was trying to say you’re not as good as you think you are because in a year from now, he’s going to be even better. Two years, he’s going to be even better.”

MJF and Chris Jericho challenged The Young Bucks for the AEW World Tag Team Championships at AEW Revolution. However, they were unable to win the match despite their best efforts.