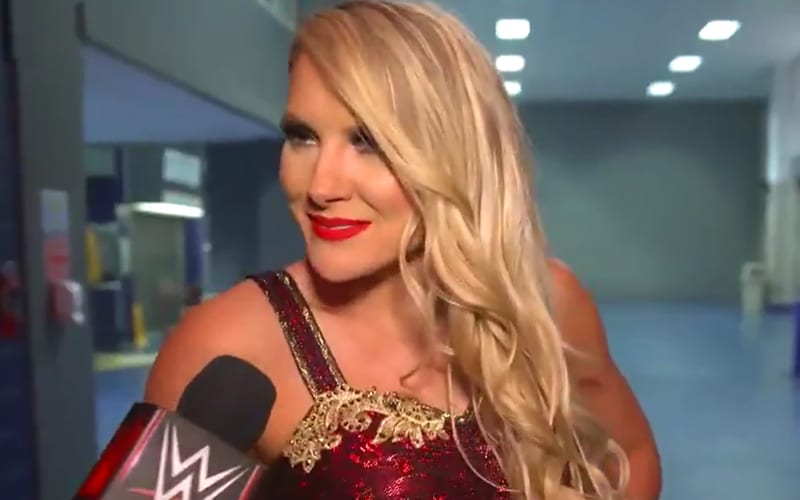 Lacey Evans’ pregnancy caused WWE to change a lot about their storyline for her. A title switch was also nixed in the process. Now she is out of action while pregnant with her second child.

While speaking to The Bella Twins’ podcast, she revealed some details about her recent life events. She was trying to have another baby prior to starting her recent storyline with WWE. Then once she was just about to have her big match with Asuka she was positive and baby #2 was on the way.

“Obviously they were so supportive of even the thought of extending my family and having another baby.  For a couple months, we tried.  I’m taking pregnancy tests and my daughter is crying because it’s negative, negative, negative, negative, negative.  She’s finally on her knees praying to God because she thinks He’s the one who will decide when it’s time.  Then all of a sudden, Vince has this idea with the whole storyline.  I was like, alright.  Everything has been negative.  I’ll get back in the game.  Sure enough, Sunday, at 8:15, I said I’ll just continue to take pregnancy tests for obvious reasons.  Sunday at 8:15, it was positive and it was one week to the day of Elimination Chamber.  I was like, this is great, but, damn it.  There’s guilt.  You feel guilty because there are so many people working for these storylines, from the writers, to Charlotte, to her father.  But, what can you do?  It took me from 8:15 to 8:40 to figure out how to write that up and inform the powers that be that this is where we’re at.”

Lacey Evans will hopefully be able to make a return to the ring, but the timing of everything is very unfortunate. At least she didn’t become champion prior to discovering that she is pregnant, but it still left Asuka with the title that WWE didn’t plan on her keeping.