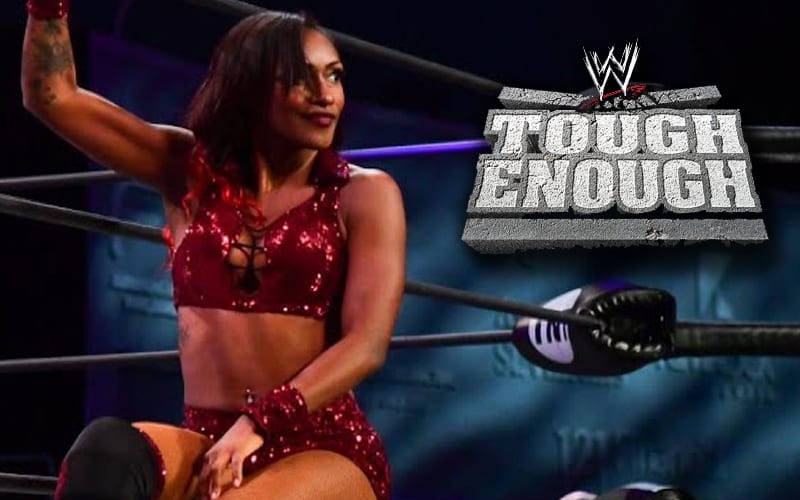 WWE rejected a few AEW stars when picking a cast for Tough Enough. Both MJF and John Silver’s audition tapes appear on the official WWE YouTube Channel. Red Velvet was also in line for the show, but they rejected her as well.

AEW Unrestricted recently spoke to Red Velvet and she talked about that WWE Tough Enough rejection. She made it through round one, but the photos she sent in next were not up to snuff, so they didn’t move her on.

“So I stepped away from wrestling before that because I was training to become a professional dancer, so dance took over my life. I stopped watching wrestling, and then I quit. Then you have Triple H making the announcement that they’re doing Tough Enough. ‘Anybody can do it. You don’t have to be a wrestler. You just have to show that you’re tough enough.’ So I went on and did the YouTube video, and it took off. They showed it twice on SmackDown. I remember somebody woke me up to the video footages of my video, and then I had a follow-up Skype interview with the producer.”

“So I had made it, I guess, through round one, and then she had asked me, ‘Hey, I need you to send over some professional photos.’ And at the time, I didn’t have no professional photos. I selfie-type [pictures]. It was just horrible what I sent in. So I didn’t make it on the show, but I’m a big believer of everything happens for a reason, and that was, I think, the bullet point that stuck for me to start wrestling because then after, it just took off. And people were like, ‘Well, why don’t you do it? You should do it,’ and I said, ‘Yeah, you’re right.’ So I started looking up schools.”

“I didn’t even know wrestling schools existed. I never even thought how people became wrestlers. When you see these celebrities, it almost feels like something that is so far that you don’t even know how to get there. You always just watch it on TV like, oh, these superheroes, these people, they’re celebrities. I’ll never get there, and then I started searching schools. And and it took off, so I think not making it on the show was the best thing that happened because it opened up my eyes to how much potential I had to become a wrestler, and then I joined the school and started wrestling.”

We’ll have to see what Red Velvet is able to do tonight on AEW Dynamite’s special “Crossroads” episode. This will be the biggest opportunity of her career as she teams with Cody Rhodes against Jade Cargill and Shaquille O’Neal.

The entire sporting world is likely to be watching Red Velvet on Sportscenter highlights tomorrow morning, but she’s had plenty more time to sharpen her skills since that Tough Enough rejection.

Also, you can check out MJF and John Silver’s Tough Enough audition tapes below.