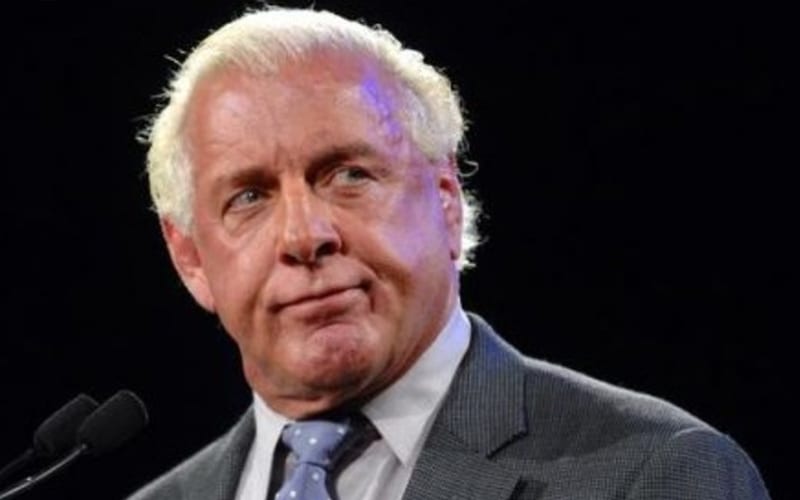 Ric Flair is a 72-year-old legend at this point, and he is protected on WWE television. He is not to be touched and he can’t take a bump. This makes writing a storyline with The Nature Boy that much more difficult.

During Busted Open Radio, Ric Flair explained that he had some ideas about how to payoff his angle with Charlotte Flair. Lacey Evans got pregnant and they switched up all of those plans. Flair had some ideas, but his physical limitations stopped everything.

“I did have some ideas. My problem was, they won’t let me get in the ring because it’s so hard to get me cleared because of my health issues, even though I have been cleared by my doctors. I just don’t think they’re prepared to let me get in the ring in case something happened. I could have 40 releases, but, it would be that, why the hell are you doing that? Why the hell are you letting him do that? I actually wanted to put sweat clothes on and work out with her, which I thought would have been great and teach her some things and actually have her emulate my character, doing the flips, suplex in, turn around, begging off. I had it all written down, but they wouldn’t let me get in the ring. I had the master plan. It would have been fun. It never came to fruition and I’m happy that things worked out like they did, especially for her because I think she was upset, a little bit, but then she said, ‘Hey, I’m having a baby.  This is what’s supposed to happen. I’m young. I have a beautiful daughter and now I’ve got a second one on the way.’ Everybody wants to be on TV, but, in this case, if she’s not going to be on TV for a while, it’s for a very wonderful reason that we’re all aware of.”

WWE won’t let Ric Flair take a bump in the ring. Perhaps, another pro wrestling company might take that kind of risk, but WWE has been through enough experiences in the past to know thta it’s not worth the reward to have someone take a bump who shouldn’t put their body through that. We’ll have to see when Ric Flair shows up next, but he won’t be taking any bumps.