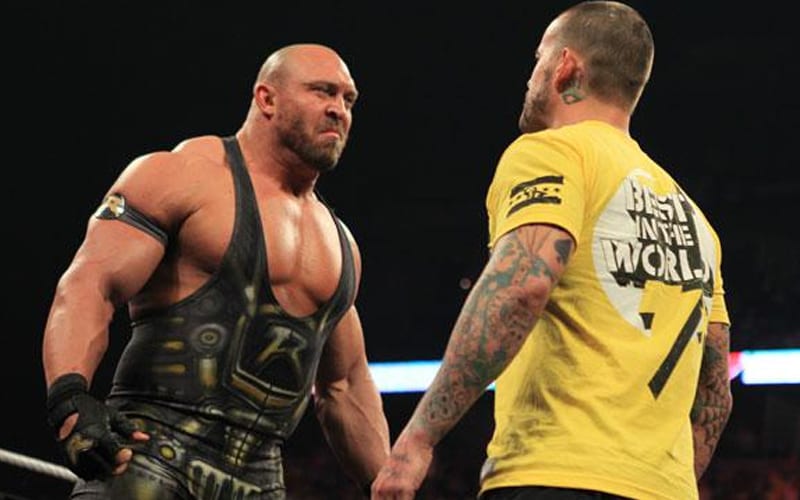 Ryback and WWE’s long history of legal battles has been well-documented. He is very confident that his fight with WWE about the use of his name and branding will be over soon, and he will win. Those legal woes existed even when Ryback was with the company.

While speaking to Excuse Me with Vickie Guerrero, Ryback explained that “WWE fired me because they thought I was never going to be able to wrestle again,” in 2010 after he had a botched ankle surgery.

The doctor drilled through nerves that he needed. Then he had to make a phone call to John Laurinaitis and convince the company not to fire him. He said his attitude toward WWE changed at that point and it became all business.

He sued his doctor over this surgery that they got wrong. Ryback didn’t know if he would ever wrestle again.

Then the former WWE Superstar explained that he received a phone call during that time which was “off the record.” He was told to drop the lawsuit against his doctors or the company would let him go.

“I had to stick up for myself. I got them to not fire me with a phone call to John Laurinaitis and I got that all overturned, but they sent the paperwork and they tried. It was a really ugly situation.”

“We had a multi-million dollar lawsuit against the doctor that messed up the surgery and this is where it was kinda really personal to me. When I came back as Ryback and overcame all that, and Jane Geddes at the time was in charge — I had just got put into the feud with Punk and she called me quote-unquote ‘off the record.'”

“I was at the doctors and she told me the company needed me to drop the multi-million dollar lawsuit because they didn’t want to look bad in the situation. I told them that this is my life. I have ankle damage that at the time I didn’t know how much longer I was going to be able to wrestle. I was in pain and my back was already starting to hurt.”

“I said ‘this has nothing to do with you guys. This is me versus the doctor. I spent the last year with this and the attorneys are pleading with me already not to drop this. She goes ‘we need you to drop it’ — literally threatened my job that I’d be fire and I wouldn’t get a chance to live my dream or do any of that; and I had just got inserted into that program and finally they started paying me.”

“At that point, I hadn’t really made any money at all… and I go ‘what do I do? Do I trust them and drop this and maybe we’re square on everything? I’m red hot right now.’ I dropped it and took a chance and lived my dream and when the statute of limitations ran out, like literally weeks later that’s when everything with creative got weird with all of that.”

Ryback said that situation really bothered him. He gave WWE his trust in this situation and dropped his lawsuit, one his attorneys told him not drop, and then WWE started to mess with his booking.

He said that the big toe on that foot still doesn’t work to this day, and the nerve that was damaged runs straight into his back. WWE convinced Ryback to drop the lawsuit over that botched surgery, but it makes you have to wonder where Ryback would be today if he told the company no.