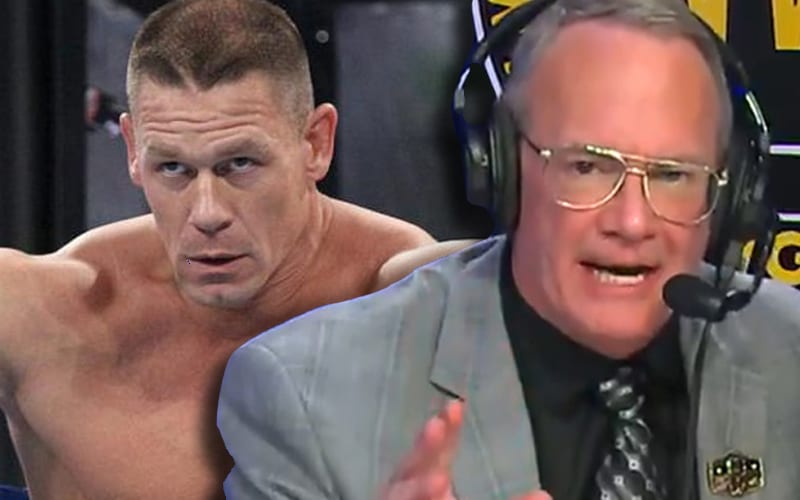 John Cena is a 16-time world champion in WWE and was the face of the company for more than ten years. He was the mainstay during WWE’s PG era and had a very divided fanbase.

While speaking on his Drive Thru podcast, Jim Cornette discussed John Cena’s career in WWE. Cena first came to WWE back in 2001, where he joined WWE’s developmental brand Ohio Valley Wrestling.

At that time, Jim Cornette was lead booker and co-owner for OVW. He recalled seeing Cena as ‘The Prototype’ and thought Cena would go on to become a heel on the same level as Ric Flair.

Cornette said that Cena had all the tools to be a great heel and the only drawback was that he was green.

“When I first saw John I thought he was going to be the Ric Flair level heel of the next 10 years. Because he had the physique, he had the athletic ability, he had the promo, he was incredible even then. He could talk about anything off the top of his head. And he was working as a heel and he got the idea of how to ‘heel’. And he was a very good one, he was just green.

I thought that with a few years experience if his work kept progressing like that, his promo was insane off the charts already. And as mentioned before, his work ethic, his personality, no bad habits […] he came in and was more self-sufficient than almost any trainee we’d ever gotten. He had such responsibility, he was driving the ring truck before too long.”

John Cena is currently busy with his life in Hollywood and is set to appear in films such as The Suicide Squad, among others.