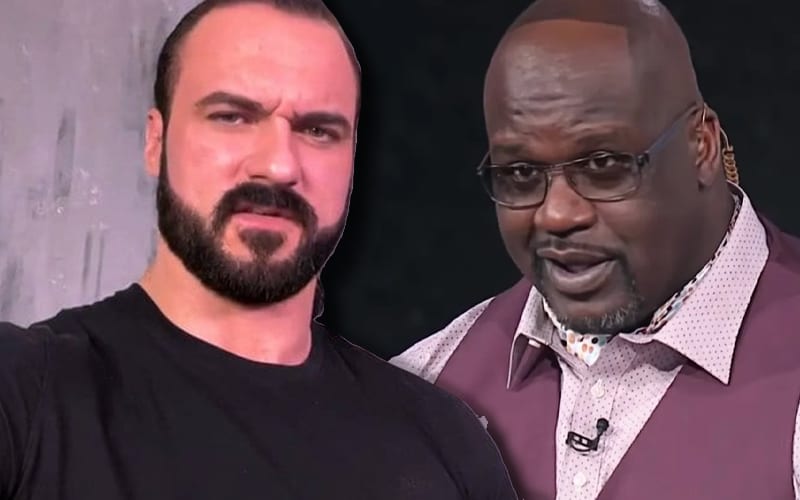 Drew McIntyre knows what it takes to make it in pro wrestling and he has the tales through his career to prove it. Shaquille O’Neal picked a different path for his life and dominated on the basketball courts instead. McIntyre still believes that Shaq could have made it in pro wrestling.

WWE reportedly didn’t book Shaq for a match against The Big Show because they didn’t believe that he was serious about it. That decision meant that Shaq vs Big Show won’t happen. Now we are set to see Shaq and Jade Cargill vs Cody Rhodes and Red Velvet.

While speaking to TMZ Sports, Drew McIntyre stated that Shaq has all of the tools needed to be a great pro wrestler. He just went with basketball instead which proved to be a very lucrative decision.

“I have been around Shaq, multiple times, over the years. As we know, Shaq appears everywhere, he’s a very busy man. He keeps himself busy and he’s shown up in WWE a few times. I was there when himself and the Big Show had a face-off. Shaq is considerably taller, which I don’t think Big Show was so happy about. He’s a big, big man, and very charismatic.”

“If he didn’t get into basketball, he definitely would have succeeded in the world of WWE. One-hundred percent, based on the size alone. He would have been a heck of a WWE Superstar — a spectacle — like an Andre the Giant, but add on that personality on top of it? That’s box office.”

Shaquille O’Neal will get a chance to perform in a pro wrestling ring, but it won’t be for WWE. The match will be on Dynamite on the go-home show before AEW Revolution because Shaq is needed at the All-Star Game.