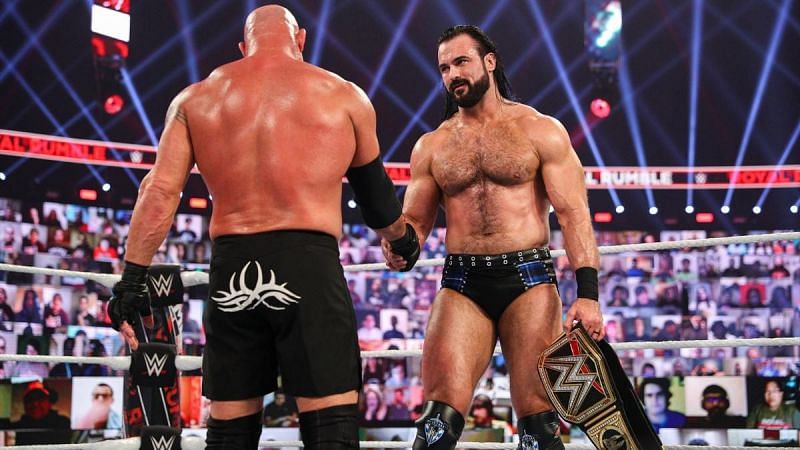 Drew McIntyre defended his WWE Championship against Goldberg at the Royal Rumble pay-per-view. It started off the show and fans were certainly looking forward to the match.

After an all-out war that saw both competitors giving it their all to win the match, it was Drew McIntyre who was victorious after hitting a devastating Claymore Kick on Goldberg.

After the match ended, McIntyre and Goldberg had a short conversation in the ring and then embraced. McIntyre was then interviewed backstage, where he revealed what Goldberg said to him.

Without revealing everything Goldberg said, McIntyre noted that he earned the WWE Hall Of Famer’s respect. McIntyre then said that Goldberg hasn’t lost a step, adding that he will need to have his ribs checked after those Spears from Goldberg.

“I mean, if the cameras didn’t pick it up I’m not going to reveal what he actually said. He made it very clear that I earned his respect and said some pretty cool things about myself as a person, as a performer, as a representative of this industry. That was cool. It [the match] was physical as hell. Goldberg, he’s not lost a step. He’s one of the most physical people I’ve been in the ring with. That spear is no joke, my ribs are going to have to be checked out after this. But I pulled off the victory, money can’t buy moments like that.”

After what transpired on this week’s Monday Night RAW, Drew McIntyre will be engaged in a feud with his friend-turned-foe Sheamus.