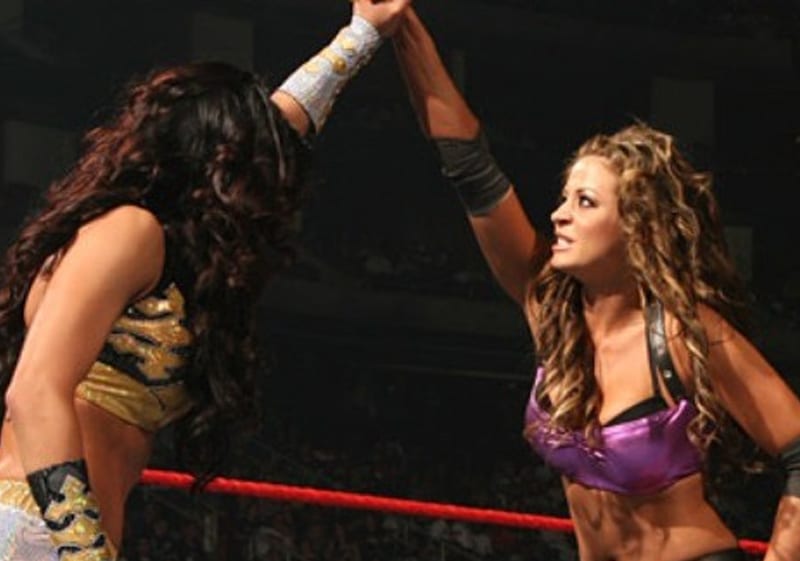 Former WWE Superstar Candice Michelle was featured prominently in the company from 2006 to 2008.

While speaking on The Wrestling Inc. Daily podcast, Candice Michelle revealed that she almost had a real fight with Melina in a match during a WWE house show.

Candice mentioned a recent exchange on Twitter between Lacey Evans and Cardi B, Michelle said that when things start getting heated on Twitter, it can get bad.

Michelle added that she and Melina hated each other and were ready to shoot fight during the match.

When things start firing off on Twitter, things can get bad. That’s actually how my match with Melina happened. Legit. We hated each other. We were legit gonna go into a real fight at a house show. Twitter had just started, we said something to each other and then we had a match. It makes for great TV. Any time there’s any heat or drama, Vince is incredible at taking that kind of stuff and running with it.

Michelle revealed that the source of their hatred for each other ultimately came down to how the two joined WWE.

“She just hate the fact that she came up with the indie scene and to wrestling school, she busted her butt that way. And to her, I was this pretty girl from Hollywood who just got lucky and got a deal. For her to wrestle against me was almost a disgrace for her. And she made that very clear.”

Michelle and Melina briefly worked together during the 2019 RAW Reunion show, where Michelle became the 24/7 Champion.

(Thanks to WrestlingInc for the above quote)