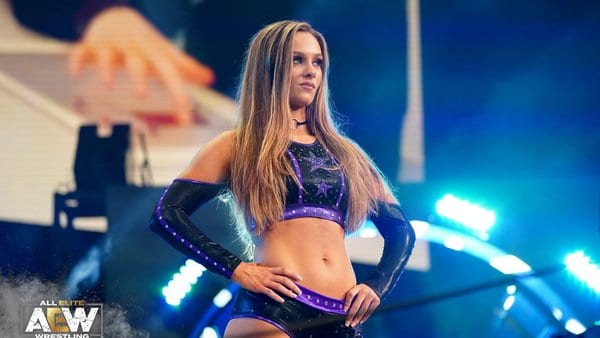 Anna Jay is one of the top female wrestlers in AEW and has been a member of the Dark Order faction for quite some time. She was handpicked by Brodie Lee to be in the group and she has certainly impressed fans with her recent matches.

Jay is currently known as number 99 in The Dark Order. She also revealed that Brodie Lee wanted to call her the ‘Queenslayer.’

While speaking to Chris Jericho on his Talk Is Jericho podcast, Anna Jay mentioned that she was unaware Brodie Lee was going to call her the ‘Queenslayer.’ Jay also revealed what the inspiration was behind Brodie Lee naming her ’99.’

“I didn’t even know he was going to call me the Queenslayer until we were live and he did it in the ring. It just kind of caught on. I didn’t even know about [number ’99’ ] until his Unrestricted interview came out. He literally said, “It only matters to me.” It is a reference to number 99, Wayne Gretzky, the hockey player, ‘The Great One.'”

Brodie Lee saw a lot of potential in Anna Jay and was also worried about her career in AEW. We will have to see what is next in store for Anna Jay.