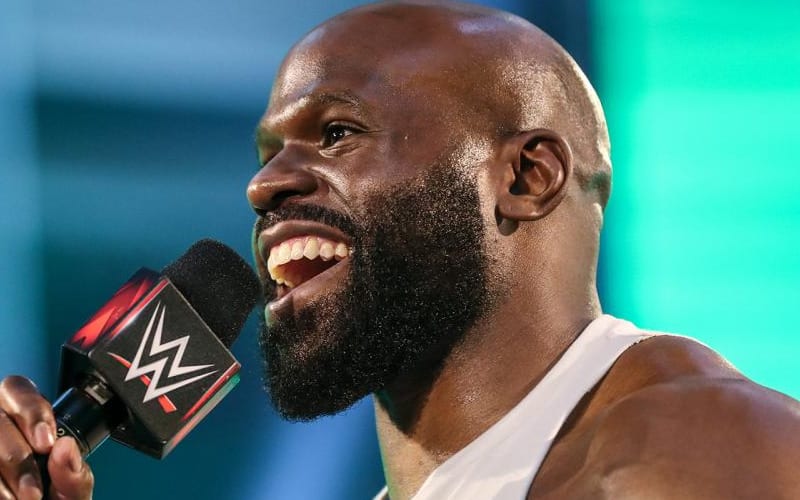 Apollo Crews is set for another IC Title match on SmackDown next week against Big E. Crews excels in the ring, but his work on the microphone needs some fine tuning. He realizes that and is working to improve.

While speaking to Comic Book, Apollo Crews discussed his in-ring promo work. He wants to improve and show people that he is more than someone who does really cool moves in the ring. He realizes that the promo work is a pivotal part of entertainment as well.

“I feel like with the promos and stuff like that, that is something that I’ve been working on very hard. I want to be more entertaining. I don’t want to just be this guy who comes in the ring with some nice pair of tights and does some cool moves. You know what I mean? I feel like that entertainment part is a huge part of this business and it’s a huge part of having people, fans. Or, it helps with fans being able to relate to you.”

“That’s what people really gravitate towards, is when they see who you are as a character. So I feel like that’s something that is very important for me to work on and for me to build a bigger fan base and for people to want to see me do better. That character work is so, so important, and that’s something that I’ve been actually focusing on a lot. That’s one thing that I’d love to be able to show more in 2021, is that side.”

Apollo Crews was receiving a push on RAW, and he picked up the United States title. Paul Heyman’s removal as Executive Director of the red brand saw Crews drop the title and get shuffled over to SmackDown. He is finally getting more screen time after many weeks off television. We’ll have to see what he has to say the next time they hand him a microphone, but he is aiming to impress.