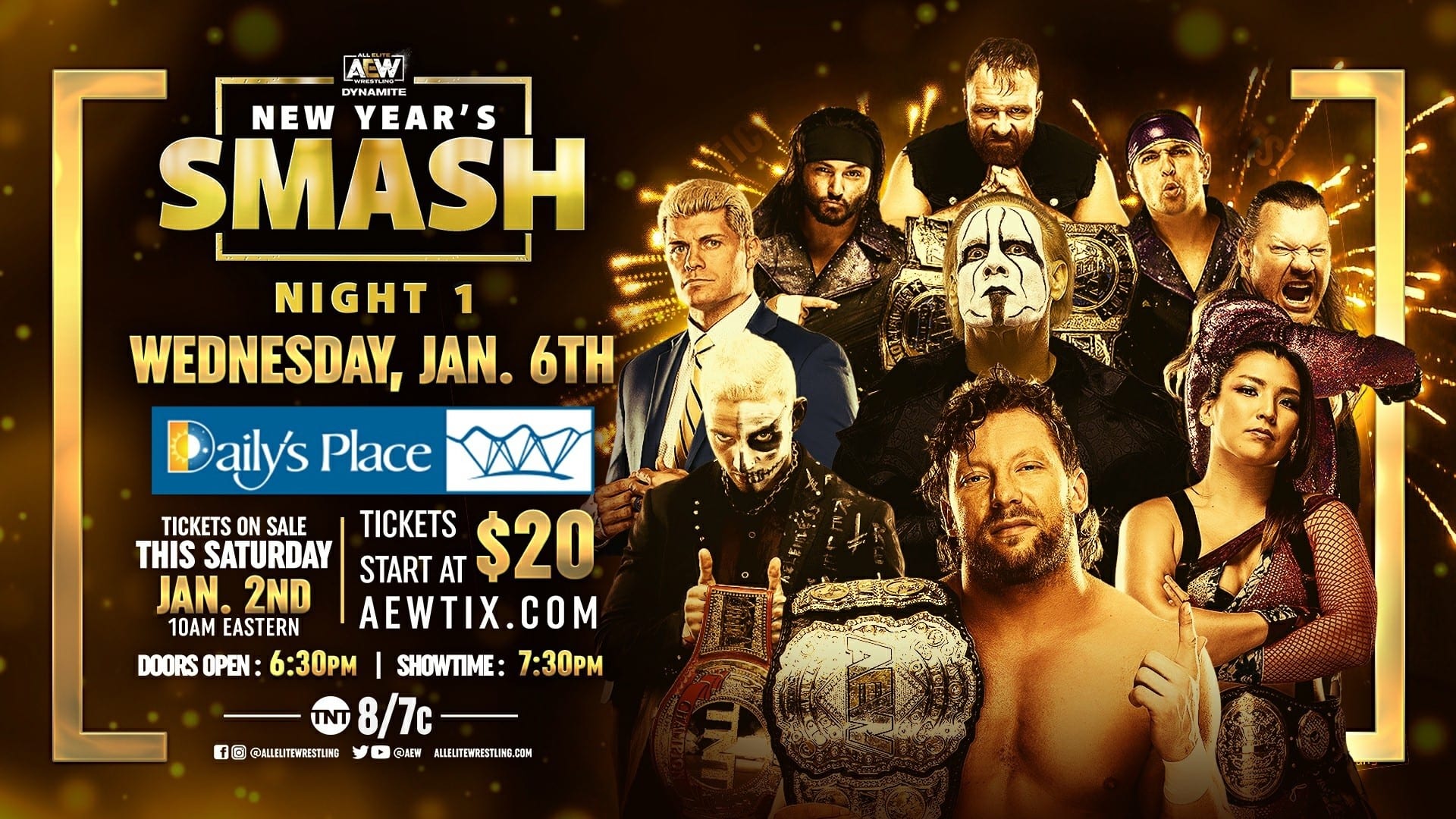 Welcome to Ringside News’ live coverage of AEW Dynamite. Tonight’s episode is billed as “New Year’s Smash – Night 1” featuring Kenny Omega making his first defense of the AEW World Title against Rey Fenix. Please feel free to refresh this page for constant updates while the show is airing while also leaving your reactions in the comments section.

The Young Bucks (Matt and Nick Jackson) and SCU (Christopher Daniels and Frankie Kazarian) vs. The Acclaimed (Max Caster and Anthony Bowens) and The Hybrid 2 (Jack Evans and Angelico)
Daniels takes a cheap shot at Caster, causing everyone to brawl. Nick snaps off a headscissors-armdrag combination on TH2 and follows with a dive to the floor. Bowens blocks a moonsault from Daniels and the heels begin to work him over. Daniels hits a blue thunder bomb on Bowens and makes the tag. Kazarian cleans house with a series of strikes. Evans cuts him off with a standing sky twister press. Matt hits a double northern lights suplex on Bowens and Angelico. He adds a few dives off the ramp and spears Angelico on the floor. The Young Bucks land Risky Business on Bowens for a two count. Nick and Kazarian connect with the BTE Trigger on Bowens but the cover is broken up by Evans. Nick blocks a 630 from Evans with knees. The Young Bucks start unloading superkicks. Caster interrupts the Meltzer Driver and Evans almost rolls up Matt. Daniels and Matt hit a Meltzer Driver variant on Evans for the win.

Winners: The Young Bucks and SCU (9:58; Meltzer Driver on Evans)

After the match, Kazarian reminds us that the next time SCU lose a match, they will break up. Daniels tells the Young Bucks that they’re coming after the tag team titles.

Jon Moxley makes his way to the ring through the crowd. He’s not going to complain about what Kenny Omega and Don Callis did to him. Instead, he’s going to endure and not back down. Moxley wants to beat up Omega, but he wants to preserve Rey Fenix’s chance to win tonight. He promises to get even with Omega.

Dasha Gonzalez is with Chuck Taylor and Orange Cassidy. Taylor says that Trent is going to out 4-5 months with a torn pec. Miro, Kip Sabian, and Penelope interrupt and mock Taylor. They setup a match between Taylor and Miro for next week. If Miro wins, Taylor becomes Miro’s young boy until after the wedding.

Wardlow vs. Jake Hager
The Inner Circle is watching from the ramp. They trade control of a wristlock and chain wrestle. They collide on a stereo clothesline and shoulder block attempts. Wardlow clotheslines Hager to the floor as we head to commercial. Back from break, Wardlow lands a spear in the corner and hits a spinebuster. He follows with a falcon arrow for a two count. Hager connects with a short-arm lariat and hits a powerslam. He applies an ankle lock but Wardlow kicks out of the hold. Wardlow knocks Hager off the apron and into the barricade. In the ring, Wardlow hits a german suplex for a nearfall. He follows with a swantan but Hager traps him in a triangle choke. Wardlow gets his foot on the bottom rope. Wardlow hits the F10 for the victory.

Team Taz and Darby Allin come to the ring for a weigh-in for the TNT Title match next week. Darby has the newly-designed TNT Title with him. Taz takes issue with Cage having to weigh-in first. Cage weighs in at 272 pounds. Darby weighs in at 170 pounds and Taz mocks the difference. They’re about to come to blows when the lights go out and Sting appears. Team Taz retreats.

FTR interrupts an interview with Jurassic Express to make fun of Marko Stunt. Stunt says that he’ll team with Jungle Boy next week against FTR.

Cody Rhodes vs. Matt Sydal
Snoop Dogg accompanies Cody to the ring. Sydal connects with a few leg kicks and adds a roundhouse kick. Sydal connects with meteora onto the ramp, narrowly missing Snoop. Sydal may have tweaked his knee. Cody misses a punch at ringside and hits Serpentico in the crowd. In the ring, Sydal lands a flying crossbody but Cody rolls through and applies a sharpshooter. Cody continues to target the knee as we head to a break. Back from commercial, Cody hits a reverse suplex from the middle rope. Sydal avoids a top-rope moonsault, connects with a knee strike, but finds knees on a shooting star press attempt. Cody hits an inverted DDT for a two count. He connects with a Disaster Kick but Sydal won’t stay down. Sydal snaps off a hurricanrana and hits a lightning spiral for a nearfall. Cody avoids a knee strike and hits two Cross Rhodes for the victory.

Chaos Project attack Cody after the match until Sydal makes the save. Snoop Dogg lands a top-rope splash onto Serpentico.

AEW Women’s World Title: Hikaru Shida (c) vs. Abadon
Abadon attacks Shida during her entrance, but eats a kendo stick shot. In the ring, Shida connects with a basement dropkick. Abadon blocks a running knee strike and bites Shida’s leg. She sends Shida into the barricade and then drags her under the ring. Abadon comes out with blood in her mouth. Shida emerges bleeding from her neck. In the ring, Abadon hits a facebuster and takes over. We head to a break. Back from commercial, Shida lands a dive from the middle rope to the floor. In the ring, Abadon connects with a clothesline. Shida responds with Tomoshi for the win.

AEW World Title: Kenny Omega (c) vs. Rey Fenix
Omega immediately starts targeting Fenix’s right leg. He spikes Fenix on a hurricanrana and starts getting cocky. Fenix answers with a hurricanrana of his own and adds yet another one onto the floor. In the ring, Fenix flips out of a tornado DDT and connects with a dropkick. Omega chops him in midair and rams him into the barricade. Fenix hops over the barricade but falls victim to a snap dragon suplex onto the floor. Omega hits a back suplex onto the apron. He hits another one onto the edge of the barricade. Back in, Omega hits a Kotaro Crusher and takes control with a backbreaker. Fenix fights back with a springboard headbutt and a shotgun dropkick. Omega retreats to the floor but gets wiped out by a dive. Back in, Fenix hits a powerful german suplex for a nearfall. Fenix connects with a flying double stomp as we head to commercial.

Back from break, Fenix connects with a superkick. Omega ducks a roundhouse kick but eats another superkick. Both men are down. Omega hits a powerbomb and connects with a V Trigger. Fenix counters the One-Winged Angel with a reverse hurricanrana. A distraction by Don Callis allows Omega to connect with another V Trigger. Fenix runs into the ring and hits an ace crusher. Fenix adds a piledriver but Omega barely kicks out. Omega blocks a frog splash with knees and catches Fenix in midair with a tiger driver. Another V Trigger gets a two count. Omega hits One-Winged Angel to retain his title.

After the match, Don Callis says something has happened backstage. They show video of Eddie Kingston’s group attacking PAC and Penta. Omega goes to attack Fenix but Jon Moxley makes the save with a barbed wire bat. Gallows and Anderson appear and attack Moxley! The Good Brothers hit the Magic Killer on Moxley and stand tall with Omega. Omega continuously hits Moxley with the barbed wire bat. Wrestlers at ringside try to make the save but Omega and the Good Brothers fight them off. The Young Bucks finally come out to confront Omega. Matt Jackson actually makes the save for Omega. Omega, Good Brothers, and the Bucks too sweet to end Dynamite!