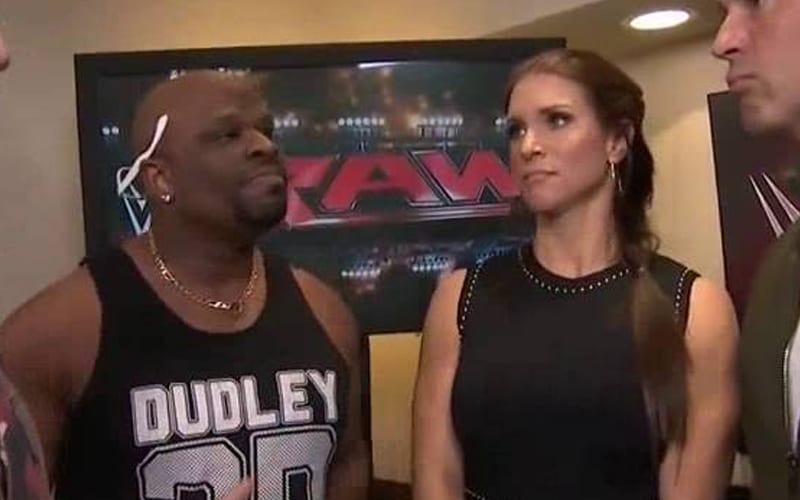 WWE Hall of Famer D-Von Dudley is a legend in the world of professional wrestling. Together with his long-time partner Bubba Ray Dudley, they won several tag team titles in various promotions during their career.

During his time in WWE, Stephanie McMahon would make frequent appearances on WWE television as an on-screen character and would be involved in featured storylines. It seems during that time, D-Von Dudley was interested in Triple H’s wife.

The WWE Hall Of Famer recently spoke on the Average Blokes Show and was asked whom he would want to put through each of the tables. When a jagged table was shown to him, D-Von Dudley revealed that he and Bubba Ray Dudley always wanted to put Stephanie McMahon through a table, but it never happened.

D-Von Dudley also admitted that Bubba Ray Dudley made fun of him when the WWE Hall of Famer told his tag team partner that he was infatuated with Stephanie McMahon.

“I would have loved to have dated Stephanie McMahon. I am infatuated with Stephanie. I think she is beautiful inside and out, is funny, charismatic. She is everything that I would think that a woman should be if I wasn’t, if I wasn’t married.”

Dudley then jokingly added that he could put Stephanie McMahon through a table and then give her a huge hug when her husband Triple H isn’t looking.

D-Von Dudley is currently working as a producer in WWE.

(Please credit Ringside News if using the above quote)