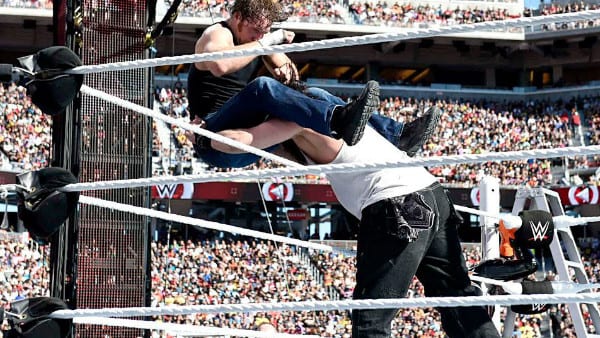 Jon Moxley and Brodie Lee were good friends in real life and had been working on the independent circuit long before WWE signed both of them.

Moxley and Lee were participants in the multi-man Intercontinental Championship Ladder match at WrestleMania 31. One of the highlights of the match saw Brodie Lee throwing Moxley out of the ring and onto a ladder on the outside.

Moxley revealed that he and Brodie Lee wanted to be featured in the highlight reel, which is why they did that scary spot. He revealed what Vince McMahon thought of the bump as well.

“We wanted to make the highlight reel. We figured the only way we could do that was if I nearly killed myself with a death-defying bump. So we devised this spot where he powerbombs me from the ring to the floor through a steel ladder, and that’s f—— sketchy. It’s an extremely dangerous bump, going backward at a high angle. It was a gnarly bump. Vince [McMahon] bugged out. He thought I was dead, which meant it was a good f—— bump. And we made the highlight reel. I maintain to this day that I would not have trusted anybody else on the planet with that bump. I put my life in his hands, and I walked away.”

Moxley had also competed against Brodie Lee in an AEW World Title match in AEW.