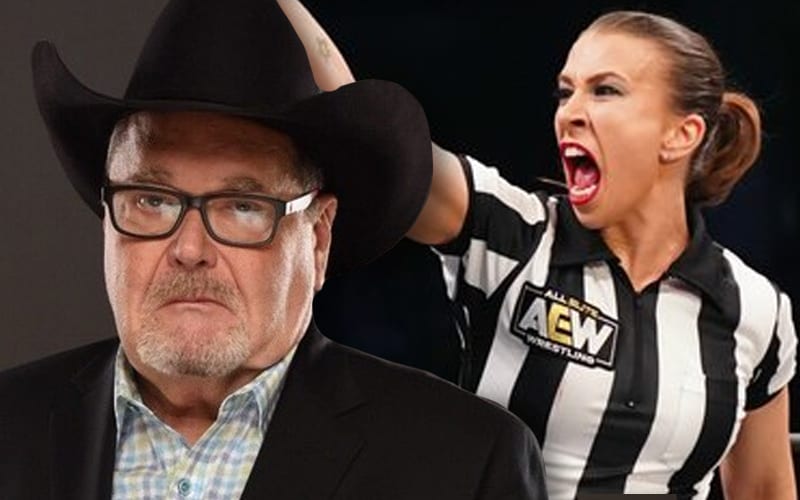 Jim Ross drew some controversy with his comments about selling in AEW and high spots. He is willing to assist anyone to help them get better in the ring. That advice isn’t limited to pro wrestlers.

During Grilling JR, the WWE Hall of Fame announcer revealed that he has also mentored referees in AEW. He talked about advice that he recently gave referees that will hopefully help them avoid a stray punch in the future.

“I think the referees are being abused. You know we’ve got nice people refereeing in AEW. Good, hardworking. I get on their ass sometimes, but they all know I mean well by it, and they know that I’m the only who’s gone to try and help them with their work in the ring. They appreciate that. It doesn’t mean that I’m right.”

“Here’s an example I was telling refs the other day, you know when you back someone into the corner, when a guy has someone in the turnbuckle, and you’ve got another opponent, his opponent is standing in front of them. You’ve got to break, they need to be broken [up], where do you stand? You stand on the left of the person you’re behind. You know why you do that? Because most of them are right-handed and you wanna be out of the line of fire and not with an elbow in your teeth.”

Jim Ross said when he started refereeing back in the day, he had to protect his “beautiful smile.” He had to learn how to protect himself, and he told the referees that they need to be out of the line of fire. This was something they had never been told before.

When it comes to the controversy Jim Ross drummed up with his statements about high spots, he doesn’t seem to mind it. He’s not backing down from what he said. Ross did admit that he can sometimes be a bit abrasive with his opinions.