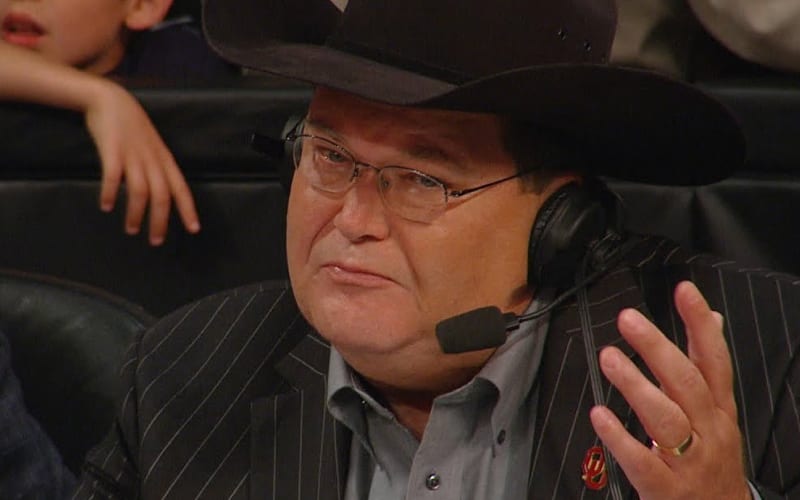 Jim Ross is a WWE Hall of Famer and a legendary broadcaster. He left WWE behind him, and he intends to end him career with AEW. This is something that he has made clear in the past. Tony Khan likely wouldn’t lie to him like WWE did.

During a Q&A on AdFreeShows.com, Jim Ross discussed one time that WWE lied to his face. He was visibly upset on live television during the 2008 WWE Draft. They called his name and split him up from Jerry Lawler. That really upset JR because he was told the night prior that they weren’t messing with the commentary team

“It was fumbled and not handled well in my view.  I was told the night before the draft, ‘You would think that CBS or Fox would get rid of Madden and Summerall and break them up? Are you crazy to suggest that?’ I said, ‘ok, I just want to make sure. I’m just curious, it’s just a career, that’s all.’ Then the next night, that discussion meant nothing. That pissed me off. I thought that was disrespectful. As a mature adult and a professional, just tell me what you want. I knew I was getting drafted when the cameraman knelt down in front of our desk and put the camera right in my face. Here it comes and I didn’t like it. I felt like I was getting worked and I felt I didn’t deserve that in my view. Maybe I took myself too seriously, but I didn’t like it.”

Jim Ross is now with Tony Schiavone on AEW Dynamite, and Excalibur makes a good third to their team. Tony Khan isn’t likely to change around his commentary team and he secured them all to contracts to make sure of it.

WWE really did surprise everyone they could with the Draft. They liked to get an organic reaction. The presentation has changed a bit over the years, but some of the talent are still surprised to hear their names called.