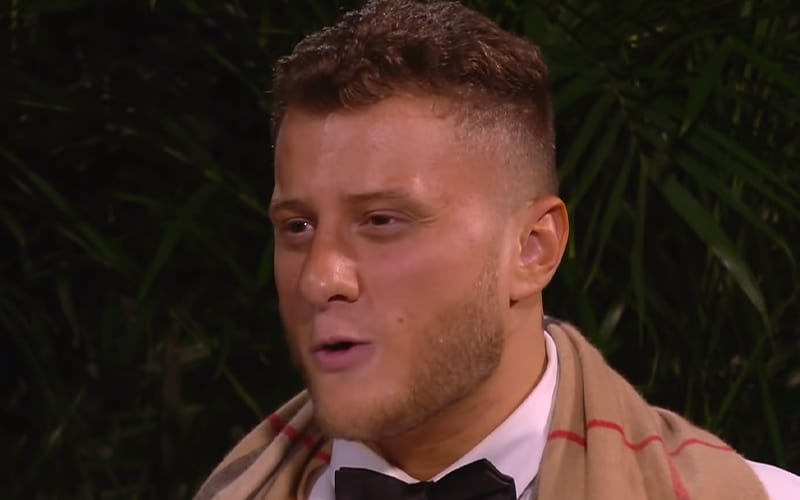 MJF is the Salt Of The Earth, and he’s pretty ruthless on Twitter. It’s nothing for him to diss a crying child or tell a talented artist they should cut off their hands. MJF probably didn’t expect his ex-girlfriend would get involve in a recent Twitter exchange.

One fan tweeted out a drawing of MJF holding a cat like a James Bond villain. MJF didn’t appreciate that fan art at all. He replied back saying: “I hate cats.”

Allie Kat, who used to date MJF, replied with: “YEAH we know.” This drew an immediate response from everyone on her timeline. It was widely considered as a very brutal reply.

MJF broke up with Allie Kat in June, 2019. She was left homeless for a bit. She detailed that terrible breakup with MJF in a candid tweet. That tweet included a longer write-up posted with a screenshot which you can read here:

“I quit my job and moved everything to a new state where I didn’t have family or friends. After all this time of being with someone who complained I didn’t let me walls down, I finally caved, and trusted them when they told me, ‘I want to take care of you and give you the same opportunities I had now that I have the opportunity.’”

“So, you could see how when this same person tells you, ‘I just can’t be in a relationship right now’ it sends your whole world spiraling. Now I have lost my love and best friend, my new family, no financial support, no home, and no where to stay in this new city that I was gaining footing in.”

“I had appointments and bookings centered around living there and the rug got pulled from underneath my feet. I have acted out, and I apologized. Nothing I said hasn’t been true, but it doesn’t mean it needs to be seen or said by the general public. It’s unprofessional, no matter how hurt I am. Someone who cares deeply about their image and their perception in locker rooms shouldn’t have to worry that their real life will come into the public eye, and I am sorry.”

“More so, I am sorry to all the fans. I am sorry I had a moment of weakness for you all. Last week, I couldn’t bear the thought of being around a culture that consonantly totes this person who just broke my heart. That’s not the person I want to be, or the role model. I have always wanted to be a strong figure that persevered, over came, and found success without having to compromise my own values and needs.”

“I have prided myself on being genuine, and while my hasty lapse in judgement was a genuine look into my unstable thoughts at the time, it’s nt who I am at the core. While this road is longer and harder, I will continue to be a wrestler who prides themselves on the art, the spectacle, the integrity, and the fans of it. The person I gave my all to, gave me up. I am not going to go into specifics, it’s true that once you hit rock bottom, the only place to go is up. So here I am, finally reaching back out to everyone who has been concerned or worried about me, and I am thanking you all. I have seen the messages and the love, and i am appreciative of it all. Now it’s time to give my all to myself again., and to y’all. Maybe it was the chair to the face, maybe it was the cold words, maybe it was the kind ones, whatever it was, I realize I regret every thinking I should step away from wrestling. I am sorry to everyone for making you think for this long, that something-someone- could take me away from y’all. I am going to treat every match like the gift it is and not take it for granted again.”

This just goes to show that you never know when someone from your past might pop in when you least expect them. You can check out the social media posts below.