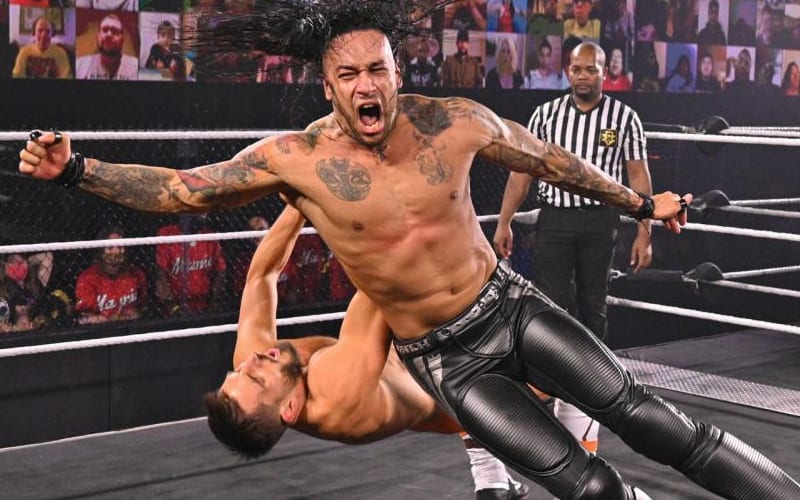 WWE’s NXT brand is coming off a WarGames event that saw a fun triple threat match. Leon Ruff took on Johnny Gargano and Damian Priest with the NXT North American Title on the line. It was a unexpected angle, and it wasn’t an easy sell for everyone either.

While speaking to X-Pac 12360 Podcast, Damian Priest revealed how he originally felt about the entire Leon Ruff storyline in NXT. He wasn’t invested at first, but he did end up seeing the direction and going with things to create a successful program that told an interesting story through WarGames.

“When we first started [the storyline], I wasn’t 100% invested in it. I didn’t know what to expect and, of course, everybody has a better idea and everybody is the best booker ever. In my head, I had other ideas and I didn’t know him. ‘What are we doing?’ We did and got it done. Then I got to be around him a little more and have conversations. As we progressed and everything happened, I couldn’t imagine a cooler storyline that wasn’t about me but actually elevated and helped someone else, deservedly. I really like Leon Ruff. He’s just as loveable, humble, and respectful (as you see on TV).”

“I’m really happy he’s getting this spotlight. I don’t know how his career is going to develop, but I look forward to watching it and being along for the ride. He hit my heart, just like most of the audience. I felt a bond to the person. He loves this business. It wasn’t something I was super enthused about, but I learned my lesson of, ‘not everything is going to be the way you think, but it’s probably going to be pretty good if you just trust.’”

We’ll have to see what’s next for everyone in this situation. Leon Ruff certainly experienced a high point in his career, and it was quite unexpected. Damian Priest’s size and ability will likely see him receive plenty more opportunities to come as well. It just goes to show that sometimes you need to feel out the situation even if you’re unsure about things in the beginning.