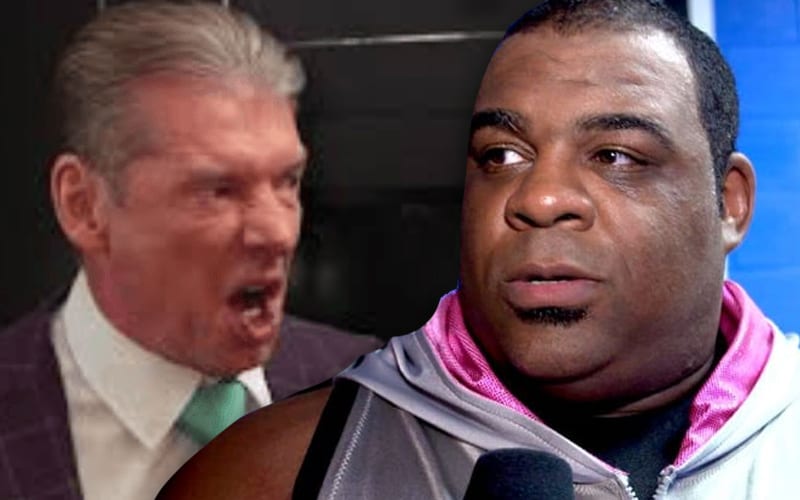 Keith Lee, like many WWE Superstars, worked as an extra prior to arriving in the company. Not every Superstar can say that Vince McMahon punched him in the face.

Vince looked back and appeared to be confused. He had nobody to hit during the brawl, so he changed things up and kicked someone else. Then Triple H and Shane McMahon ganged up on Lee, who was leaning on a barricade. Triple H followed that up by throwing Lee against the opposing barricade to really set in the assault.

Keith Lee revealed during his new 24 WWE Network special that someone told him to fall. Vince McMahon really did hit in in the jaw with that punch, but he is pretty sure now that they were playing a joke on him.

“Someone came up to me and was like if you’re getting punched by Vince McMahon, you need to go down. I’m like, hey no problem! And I’m pretty sure that whoever that was played a joke on me because the moment that the McMahons came down and Vince McMahon jawed me and when I say he jawed me, he JAWED me. So I go down and he looks confused. Of course! Why would the 300-pound dude go down from one punch? And when they were done with the others, it was like there was no way we’re done with the big guy! So they picked me up and I was like ‘What did I do to deserve this?!’”

Vince McMahon has a really strong punch, and he laid it into Keith Lee who fell as he was told to. It also caused them to improvise a bit. This is pretty footage because now Keith Lee has a much different relationship with Triple H and Vince McMahon.

You can check out the video footage below.