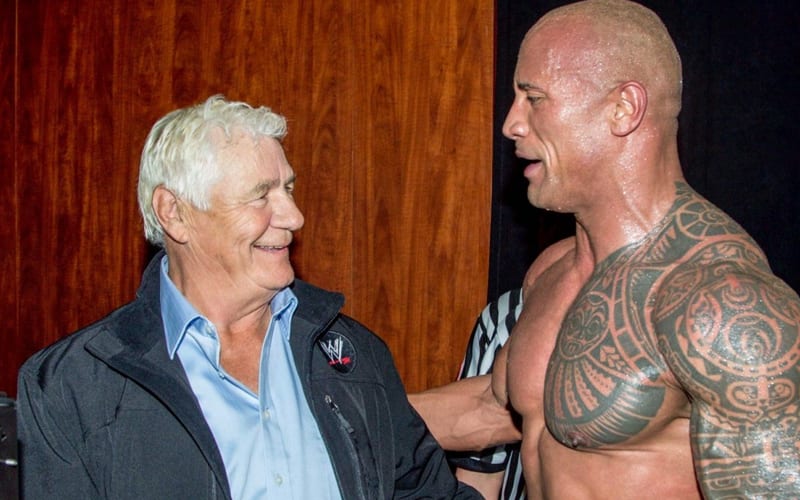 Pat Patterson passed away today at 79-years-old and during that time he influenced so many and created tons of unforgettable moments in WWE history with his backstage contributions.

The Rock sent out a tribute to Patterson like so many have today. Pat Patterson’s lasting impression on the pro wrestling business will never be forgotten and The Great One honored Patterson as the true trailblazer that he really was.

Patterson was the one who was responsible for telling Vince McMahon that he needed to sign a young Dwayne Johnson to a contract. That was never lost on The Rock either.

Rough phone calls to get this morning to tell me, our dear family member, Pat Patterson who was my pro wrestling mentor and father figure has passed away.

A @wwe hall of famer, TRUE trailblazer and one of the most brilliantly creative wrestling minds the industry has ever known.

He was also responsible for calling Vince McMahon when I was training to become a pro wrestler (my $7 bucks days) and said, “Vince you gotta see this kid work in the ring”.

Vince flew me to RAW a few weeks later and I had my first match EVER in Corpus Christie, Texas.

The rest is history and years later, here I am writing this post.

…I’ve lived a life that’s full,
I traveled each and every highway
But more, much more than this
I did it my way…

I’ll see you down the road

This is a sad time, but it is also an occasion when we can all celebrate the memories that Pat Patterson left for so many. The Rock and others mentioned Patterson’s unique spirit and how he did things his way. There will undoubtedly be plenty of tributes to come.