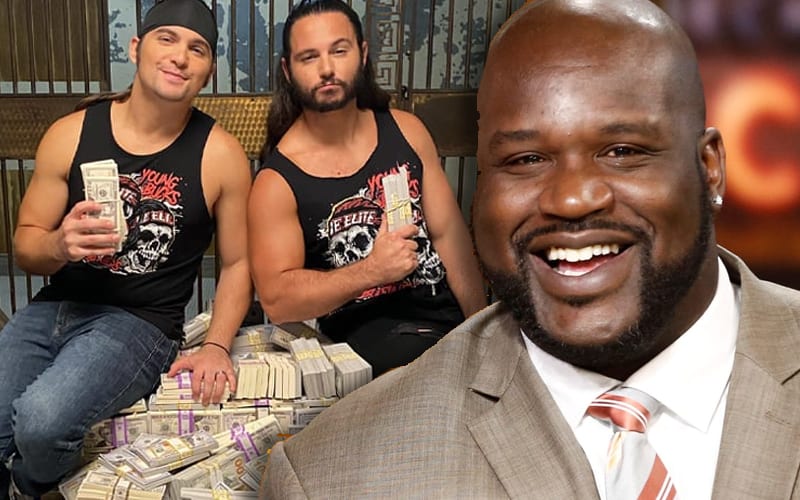 Shaquille O’Neal’s name was dropped during AEW Dynamite as Jade Cargill made her much-discussed debut. There are rumors of Shaq coming to AEW, and he was backstage at Full Gear.

While speaking to Wrestle Zone, the Young Bucks discussed getting a standing ovation from the giant NBA hall of famer when they got backstage. The Bucks had just won the AEW World Tag Team Titles from FTR, and they were wearing Lakers colors. There is still a huge regret that they didn’t snap a photo with Shaq, but it was still a great moment.

It’s crazy. [Shaq] was backstage at the pay-per-view and when we got backstage, he actually stood up and gave us a standing ovation for our match. And to me, it was insane. For one, we were wearing the Lakers’ colors and FTR were wearing the Celtics’ colors. That was one regret actually, was not getting a picture with him in our ‘Lakers’ outfits, but that was so cool to have him back there and to give him a fist bump. God, he’s so big, like you don’t realize how massive he really is until you see him in person. It’s insane but yeah it’s gonna be interesting to see what he does.

We’ll have to see if AEW can get Shaq to come in for some kind of program. Cody Rhodes could be Shaquille O’Neal’s target if and when he does finally make his debut on AEW television. He is obviously a big fan of the product.