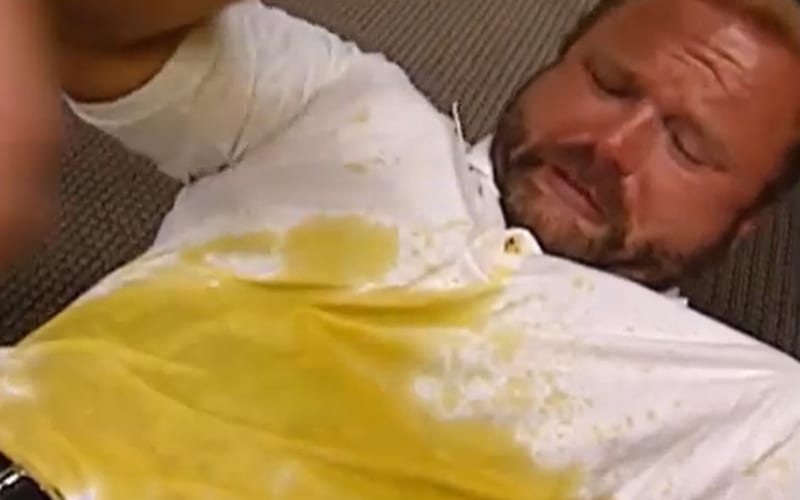 Steve Austin did a lot of things during his time with WWE. He held championships, main evented many pay-per-view events, and he even urinated on Arn Anderson. Years later, Anderson hasn’t forgotten about that last segment.

During The Arn Show, the Enforcer talked about that segment at great length. He said that Austin and Jake Lanza both tried to get the segment changed, but it didn’t help change Vince McMahon’s mind. Anderson has an idea that it might have been personal in Vince McMahon’s mind as he was looking for a demeaning thing to do that would possibly get back at Anderson for leaving so many years ago.

“Two people that were heavily involved in it were Jack Lanza who was like the backstage producer and Austin himself. They both told me that they went to Vince individually and collectively and said, ‘This guy is heavily respected in the business with the boys and the audience as well. This is really demeaning. Can’t we do something else? Both got turned down, flatly. Do I suspect foul play and a reason in my mind to do this? Yes.”

“Will it be very easy for his case to be, well, we don’t want to do it to Ric. It’s almost like you went out and put Austin over and got him ready for Ric for the next big PPV. You put him over clean in the middle but it’s just another way to do it. It could be punishment for leaving in 1989. He can wait a long time when he feels betrayed or feels like you’ve wronged him. We were the very first guys to turn our notice in during that era. I know he didn’t like it and you couple that with some other things and do I think that’s a possibility? Yes.”

“I know he waits a very long time if he feels like you screwed him. I can possibly see that. It was just so degrading and demeaning if you looked at it from the outside in. I’m a guy that you know what popped up in my head when they said we want Austin to pee on over you? My wife and kids. But that’s the reason why I did it and did it smiling. That’s who I am responsible for. People may think that’s not true, but everything I’ve done in this business, every sacrifice I’ve made, every time I’ve had guys come to me that I respect and say, ‘You don’t have to do that. You’re Arn Anderson. You don’t have to do that bullsh*t.”

“Just tell them no.’ I did what was requested to take care of my family. That’s my first responsibility on this Earth. He knows that anything he comes up with that is his idea that he wants to do for whatever reason, you can say no and find other employment. If you don’t say yes and do it with a smile, you may do with your teeth gritted and he’s going to know that and it’s like you didn’t do it at all so the punishment is going to be the same. He wants blind obedience in all of his requests and he doesn’t want you to have your own opinion unless it runs parallel to his. The audience knew he really didn’t pee on me although it looked the part.”

We might never know the true intentions behind peeing on Arn Anderson. It was certainly a move that got Austin some heel heat. Arn Anderson has some good ideas about why the segment went down. No matter how badly he wanted to avoid that humiliating segment, Anderson still did it because that was his job at the time.