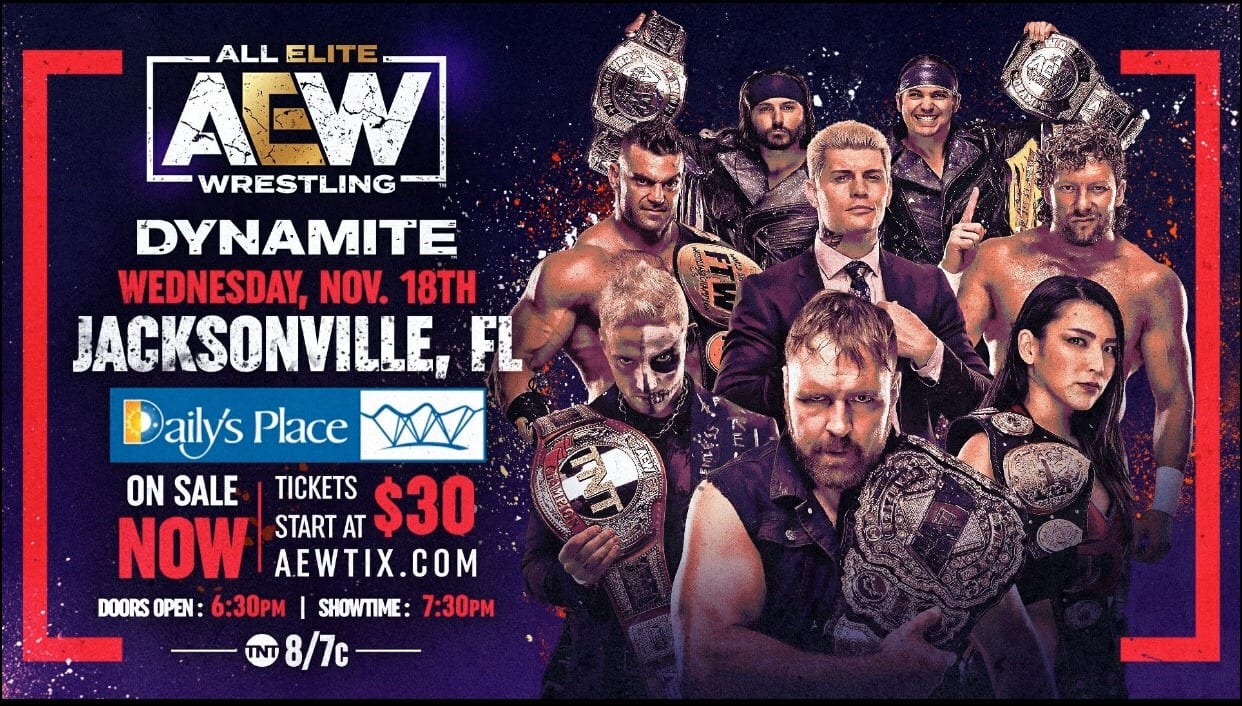 This will be my first post for Ringside News and I am excited to be on board. I’ve been writing about professional wrestling off and on since 2008, primarily reviewing independent shows.

The card for Dynamite tonight is as follows:

The Young Bucks (Matt and Nick Jackson) vs. Top Flight (Darius and Dante Martin)
Darius avoids a few superkicks from Nick and connects with an enzuigiri. Top Flight showcase some double team work, Dante hits a slingshot senton on Matt while Darius kicks Nick off the apron. Top Flight tease stereo dives and the Young Bucks appear to be frustrated. Nick levels Dante with a superkick. Matt connects with a dropkick through the ropes on Darius. The Young Bucks isolate Dante, powerbombing him into Darius in the corner. They continue beating down Top Flight with double team offense. Dante snaps off a headscissors on Matt and makes the tag. Darius hits a standing Spanish fly on Matt for a two count. Top Flight land dives to the floor as the crowd comes alive. In the ring, Dante hurricanranas Matt off the middle rope. Matt answers with a spear. Nick punts Darius from the apron. The Young Bucks hit an assisted sliced bread on Dante for a nearfall. Dante almost rolls up Matt but falls victim to the BTE Trigger and the Young Bucks pick up the win.

After the match, Jack Evans and Angelico attack Dante until the Young Bucks make the save.

The Inner Circle is in Las Vegas. They are shown playing Blackjack, with MJF stealing Sammy’s blackjack hand. Ortiz and Sammy are generally very skeptical of MJF. Wardlow and Jake Hager aren’t getting along either. MJF and Jericho attempt to one-up each other with a drink order in a similar way to the steak dinner. Konnan makes a cameo and gives the Inner Circle drugs. They are clearly imitating the Hangover. Wardlow and Hager start beating up bouncers. To be continued!

Jon Moxley cuts a promo in the back. He tells a story about his dad picking him up from a police station. Moxley says that he’s the “good guy.” He has a lot on his plate right now, but Kenny Omega doesn’t scare him. He also reveals that his wife (Renee Young) is pregnant. Moxley claims that he’s the best wrestler in the world.

Orange Cassidy vs. Kip Sabian
Miro is on commentary. They trade control of a side headlock. Sabian won’t allow OC to put his hands into his pockets. OC tries a headscissors but falls victim to a side slam. OC connects with a dropkick with his hands in his pockets and follows with a dive to the floor. Penelope Ford provides a distraction, allowing Sabian to take control with a gutbuster. Sabian begins to settle in on offense as we head to commercial. Back from the break, OC lands a flying crossbody and hits a tornado DDT. Sabian blocks another DDT but misses a gamengiri. OC hits a diving DDT for a two count. Sabian rolls to the apron but slips on a springboard. He recovers with a 2k1 bomb for a nearfall. OC fights off a swinging neckbreaker but runs into a knee strike to the face. OC traps Sabian in the Orange Hook for the victory.

Miro attacks OC after the match. Chuck Taylor and Trent quickly make the save.

Tony Schiavone is in the ring for the contract signing. Kenny Omega has his now usual elaborate entrance. Jon Moxley’s music plays but he doesn’t come out. Cameras backstage show Moxley laid out with staff checking on him. Omega says last time it was Moxley’s elbow and it’s happened again. Omega signs the contract and leaves the ring.

Part 2 of the Inner Circle in Vegas. Jericho makes a toast and welcomes Elvis to the Inner Circle. MJF makes an impassioned speech about how he appreciates everyone. Cameras cut to a hotel room with Jericho and Elvis in the same bed. It’s morning and everyone is hungover. Sammy has written on MJF’s face with sharpie. There are a few references here which I frankly do not understand. Jericho and Santana find Swoggle in a diaper as the segment ends.

PAC vs. The Blade
Eddie Kingston joins commentary. They brawl at ringside and Blade gets sent into the barricade. In the ring, PAC connects with a shotgun dropkick. Blade answers with a dropkick through the ropes after a distraction by the Butcher. They exchange control. Bunny trips up PAC, allowing Butcher to lay in a shot behind the referee’s back. Blade hits a doctor bomb for a nearfall. They take a commercial break. Back from break, they trade strikes and Blade hits a powerslam. They battle up top and PAC hits a superplex. Blade tries a rollup after Butcher and Bunny get involved again. PAC recovers with a shooting star press into the Brutalizer for the win.

After the match, Butcher attacks PAC. Kingston joins in and taunts PAC. Rey Fenix makes the save but falls victim to the numbers game. Penta eventually comes out with a chair. He shows indecision but runs off Kingston and company. Death Triangle is reunited!

NWA Women’s World Title: Serena Deeb (c) vs. Thunder Rosa
They trade control on the mat and Deeb tries a pinning combination to no avail. A strike exchange raises the intensity. Rosa hits a body slam and a senton. Deeb responds with a dragon screw leg whip in the ropes and takes control. We head to a commercial break. We return with Rosa connecting with rapid lariats in the corner. Deeb’s leg work on Rosa has taken a toll, however. Rosa hits a butterfly suplex for a two count. Deeb answers with a neckbreaker in the ropes and hits a spear on the apron. Rosa fires back with a german suplex and a missile dropkick, sending Deeb to the floor. Reba appears at ringside. Britt Baker hits a neckbreaker on Rosa onto the apron. This allows Deeb to hit a powerbomb for a nearfall. Deeb locks in a crucifix but Rosa breaks free and connects with a double stomp. They trade strikes and rollups. Deeb hits an arm-capture pedigree to retain her title.

Rosa attacks Baker after the match and throws her into the barricade. Referees have to pull Rosa off of Baker. The crowd chants “let them fight.”

John Silver and Anna Jay cut a promo in the back. Brodie Lee has demanded that Anna Jay receive a shot at Hikaru Shida next week.

Also next week: PAC and Rey Fenix against the Butcher and the Blade; Will Hobbs in action; Chris Jericho and Jake Hager vs. Christopher Daniels and Frankie Kazarian.

Brian Cage and Ricky Starks vs. Cody Rhodes and Darby Allin
Taz is on commentary. Darby and Starks have each other’s offense scouted. They slap each other in the face and start brawling. Cage hits a backbreaker on Cody but eats a dropkick. Cody lands a moonsault off the top rope. Taz moves to ringside as we go to commercial. Back from break, Cage and Starks are working over Cody. During the break, Arn Anderson got ejected for getting involved after Taz interfered. Cody fights his way to tag in Darby, who cleans house. Cage german suplexes Darby, who inadvertently german suplexes Starks. Cody runs into a spear from Starks. Cage powerbombs Darby but falls victim to a code red. All four men are down. Cody hits Cross Rhodes on Starks. Cage superkicks Cody and hits an olympic slam. He follows with a super Drill Claw on Darby for the win.

Team Taz attack Darby and Cody after the match. Will Hobbs comes out to make the save. Hobbs picks up the FTW Title and hits Cody! Hobbs has joined Team Taz. The episode ends with Team Taz standing tall.