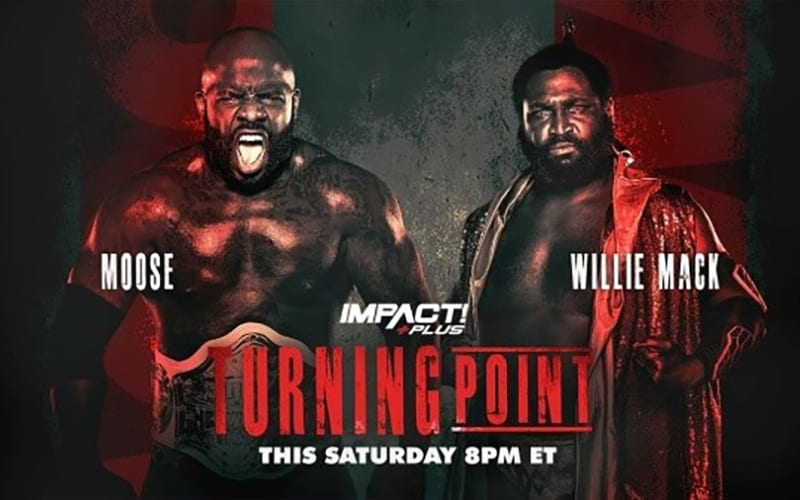 Impact Wrestling will present it’s annual Turning Point pay-per-view event tonight starting at 8PM and we will be providing match-by-match updates by yours truly.

Turning Point opens up with a video package for the event.

Eddie Edwards vs. Daivari
Edwards out first followed by Daivari. The match starts off with several locks and holds. Edwards gets knocked out of the ring at one point but gets back in. Locks and holds continue.

The two end up back outside the ring again but end up back in the ring again. Daivari is in clear control of the match. At one pint Daviari hits a top rope hurricanrana but only got a two count. Eddie takes his elbow pad off in the match and starts lacing in the punches.

Eddie gets the win after hitting the Boston Knee Party.

Jordynne Grace & Tenille Dashwood vs. Rosemary & Taya Valkyrie
Tenille is introduce by Caleb. Jordynne out next followed by their opponents. Tenille and Rosemary start the match off. Taya and Grace are tagged in just barely after the match starts. The two are locked up with holds.

Tenille tags herself in when Grace is clearly dominating the match. Tenille yells “it’s all about me in the match” as she locks on a hold to Taya. Taya tries to get the tag by Tenille drags her to the other side of the ring and tags in Grace.

Grace later goes to make the tag by Tenille jumps to the outside of the apron to take a photo. Rosemary picks up the pin for her team.

Brian Myers vs. Swoggle
Myers is out first, followed by Swoggle. After the bell rings, Swoggle tells Myers that Impact Wrestling is where he belongs. The match starts off and Swoggle gets the upper hand to start things off.

Swoggle almost gets counted out but makes his way back into the ring. Myers is now bad mouthing him as he beats him down inside the ring. Myers continues to dominate Swoggle with stomps and holds as the match continues.

Myers hits his signature closeline for the win.

After the match, Crazzy Steve makes the save after Myers beats down Swoggle.

Chris Sabin & James Storm vs. Team XXXL
XXXL make their way out to the ring first, followed by Sabin & Storm. Larry D and Sabin start the match off with holds and locks. Storm is tagged in and the two make their way to the outside momentarily. Back in the ring, Storm gets a two count pinfall on Larry D before Larry D tags in AC.

AC and Storm trade blows in the ring, Sabin is tagged in. Sabin is getting dominated for this part of the match. At one point Larry D tries to sit on Sabin but he moves out of the way.

Storm finally makes his way in the ring and unloads on Larry. Storm gets the pin but only gets a two count. Sabin flies off the rope and takes out AC. Storm is in control of the match now. Storm and Sabin do a spot were they fly to the outside of the ring and switch sides and do it again. Tornado DDT on Larry but he kicks out on two.

Larry D finally gets the tag to AC and takes out Sabin. AC goes for the pin but only gets a two count. Storm connects with a superkick and Sabin makes the pin for the win.

Rohit hits some chops but Jake grabs ahold of him and tosses him across the ring. Cousin Jake is clearly now in control of the match. He connects with a clothesline and back elbow.

Rohit gains control and hits a splash in the corner, followed by a running boot. Jake catches Rohit and drops him. Pins Rohit but only gets a two count. Rohit connects with a knee off the ropes for the win.

Joe Doering makes his debut with Eric Young and destroys both Rohit and Cousin Jake.

TNA World Championship Match Moose vs. Willie Mack
Moose is out first, followed by Willie. The match starts and Moose is clearly in control. Moose yells something about Rich Swann as he beats the crap out of Willie Mack outside the ring.

Back in the ring now, Moose is still in control. Josh Mathews at one points tries to compare Moose to Brock Lesnar. Moose is still tossing Willie around the ring and puts him in several holds. Connects with several corner moves too.

Gallows is in control of the match for a bit. Ethan gets the upper hand and stomps down Gallows in the corner. Josh & Anderson are tagged in and the beat down continues on The Good Brothers. Ethan Page and Josh are now double teaming Anderson.

A lot of back and forth action but The Good Brothers end up picking up the victory.

No Disqualification Impact Knockouts Championship Match: Su Yung vs. Deonna Purrazzo
Deonna out first, followed by Su Yung. Deonna tries to get the jump on Su. They end up on the outside of the ring where Su picks up the upper hand. They make it back inside the ring, where Su is still in full control of this match.

Deonna finally escapes and goes to the outside of the ring to look for weapons. She grabs a few and gets back into the ring. In control of the match now, Deonna puts on several holds and gets Su in the ring. Deonna puts the boots to her.

Deonna goes to hit her with some wood but Su connects with a kendo stick. They both now roll to the outside of the ring. Deonna is still in control.

Inside the ring, Deonna hits Su with the kendo stick several times before brushing her off. Deonna charges and hits a chair that was positioned in the corner. Su is now beating Deonna with a baking sheet.

They end up on the outside on the ramp. Su hits a Pedigree on the stage area. Su tosses Deonna back into the ring. Two count and Deonna kicks out. Deonna smashes a canvas over Su’s head when she goes to spit mist in her face. Deonna puts Su’s head in a chair and Deonna locks her arms. Su is passed out. The ref goes to raise her arm but picks it up on the second count. Su puts on the mandible claw and Deonna is faded. Su wraps a cloth around Deonna’s neck and is choking her. Deonna ends up getting free and hits her with a pile driver (her signature) for the win. Deonna is now the new Knockout’s Champion.

A video package is shown for the Sami and Swann rivalry.

Impact World Championship Match: Rich Swann vs. Sami Callihan
Sami is out first, followed by Swann. Match starts off with quick strikes from both men. Swann gets Sami in the corner and puts the boots to him. Sami attempts to put Swann to the matt but Swann counters and gets a pinfall for a two count.

Sami rolls to the outside and taunts Swann before getting back into the the ring. Back in the ring, Swann remains in control of the match. Sami eventually gets a few shots in and puts Swann in a hold but Swann gets to the ropes. Sami drops several elbows on Swann and puts him in a couple of holds on the mat.

Swann gets mad after Sami hits him with several blows. The two both go for kicks and they both knock each other down. More back and forth blows and eventually Sami goes down and Swann gets a two count.

On the outside of the ring, Swann goes for a handstand on the ring apron but bounces back and hits a cutter instead. Both men roll back into the ring before a double count out. Sami goes for a third pile driver but Swann rolls him up for a two count. Ken Shamrock comes to the ring but is stopped by Eddie Edwards.

Inside the ring, Sami tries to take advantage but it backfires and Swann connects with several spinning kicks to the face. Swann picks up the win after another kick to the face.

That’s it for the show. Feel free to leave any remarks in the comment section below.