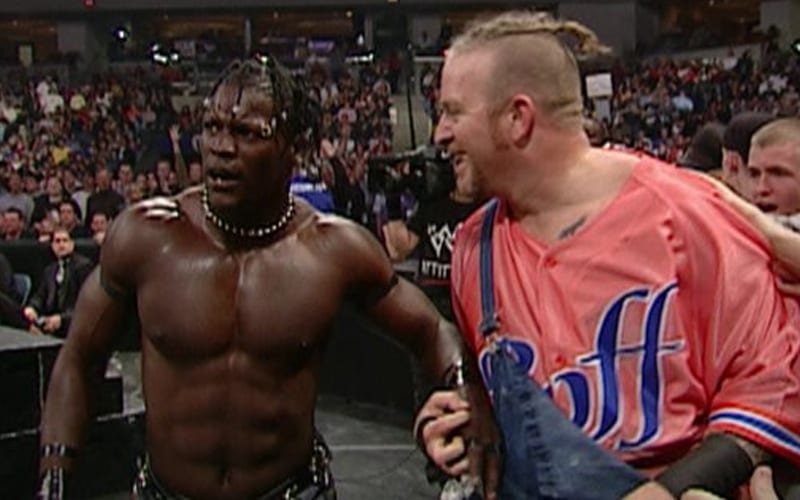 WWE Superstars have to make it through a lot before entering the public eye. Some get discouraged along the way and quit before they ever see those bright lights. That was almost the case for R-Truth.

While speaking to New Day Feel The Power, R-Truth discussed his early days in WWE. He was told that they would have him in developmental for six months, but he was already nine months in and wanting to quit.

Then Road Dogg saw what he can do in the ring as an entertainers. He knew that R-Truth needed to be his tag team partner, and he asked the future multi-time WWE 24/7 Champion to give him one more month and he would get him on television.

“The overwhelming feeling, I just embraced it and took it head on. Road Dogg saw me in developmental. I was about to quit because I was in developmental for almost nine months – they told me I would be there for six months. I was there for nine months and it didn’t seem like anything was working out,” stated Truth. “I was running out of money, I was sleeping on Daniel Bryan and Spanky – Brian Kendrick’s – and Shooter Schultz’s floor. I was ready to quit. I was discouraged because I was doing something new and different. It wasn’t a typical street. I was questioning myself. It was a whole different route that I embraced, and it was not paying off. It was not giving me what I thought I would have. I’m not a big wrestling star, so I was discouraged and ready to quit.”

“Back then, it was Kevin Kelly, and Bruce Prichard, and Terry Golden, and I told them that I’m not re-signing. I’m done; I’m going back home, and Terry Golden was like, ‘You’re going back home to what? To do what?’ I wasn’t going to go back to the streets, but I didn’t know what I was going to go back to. I just felt that it was too overwhelming. It was too much for me. It wasn’t working out. Nothing was paying off, and Road Dogg came to the TV taping and saw me rap going out. I think I wrestled Jerry Lawler that night. When I came back to the locker room, two or three guys told me Road Dogg was asking about you. I said, ‘Road Dogg of DX?’ They said, ‘yeah’. Got in the locker room, and we all know Road Dogg. Road Dogg came to my face and said, ‘Was that you dancing and rapping to the ring?’ I said, ‘Yeah.’ He said, ‘Do you want to be my tag partner?’ I said, ‘Man, I was about to quit. I don’t think this is for me. I think I bit off more than what I can chew.’ He said, ‘I’ll tell you what – I know you have been discouraged. You give me one month and I will have you on TV.’ I said, ‘Alright.'”

R-Truth has a lot of people to thank for his career. Road Dogg saw something in him that others didn’t and it made all the difference. It’s hard to imagine how different things would have been if Road Dogg hadn’t told R-Truth to give him a little extra time to get him on television.