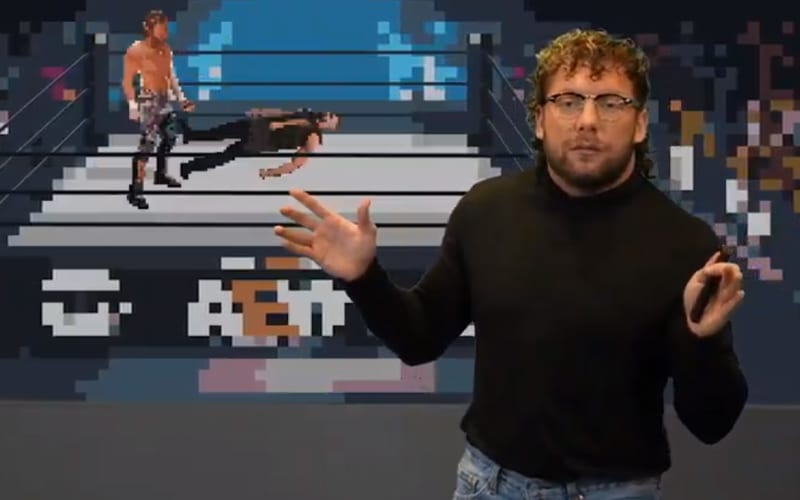 AEW fans wanted to see the company immortalized in video game form since they started. The company was working hard to get things together, and they finally had news to report today.

A leak from the AEW Games website revealed that there were three projects in development, and one is a console game developed by Yuke’s. There was a bit of a stall getting the official virtual conference underway, but AEW Games did eventually make their big announcement.

The company did finally get everything sorted out, and they started their virtual press conference at 6:45.

The wait was worth it as Kenny Omega emerged with a Steve Jobs look. He thanked fans for being there for them through the pandemic as he walked through AEW’s history. He said today they “shall re-write history and make history together.”

Omega said that it was part of his contract with AEW to be a part of AEW Games. He wants a game to be “easy to pick up, but difficult to master,” like NBA Jam or NFL Blitz.

Then he showed off some very early footage of what they have in mind in the form of a trailer. You can check that out a couple of screenshots below. He later confirmed that AEW is working with Yuke’s on the new console game. They are working with the creator of No Mercy.

Just as Omega was wrapping up, Aubrey Edwards came out to stop him. Then she put on her own Steve Jobs outfit and pushed Omega off the stage. She revealed AEW’s mobile games division. This included AEW Elite General Manager. You can check out a screenshot from that trailer below.

Britt Baker came out next dressed as Steve Jobs. She announced that she is in complete control of the AEW Games t-shirt. Cody Rhodes came out next looking a bit like Steve Jobs. He then revealed a game that is ready to paly much sooner: AEW Casino: Double or Nothing. That casino-based game will be ready in the Winter.