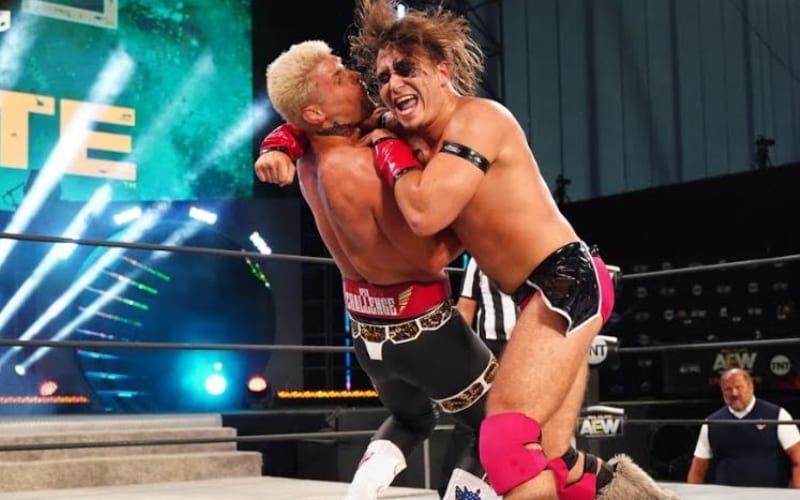 Cody Rhodes finally relented to the #CodyFearsWarhorse trend on social media, and he gave Warhorse a TNT Title shot. Danhausen couldn’t be in attendance, but he had some great advice for his tag team partner.

While speaking to Wrestling Inc, Danhausen was asked about his Warhausen tag team partner’s AEW TNT Title opportunity. Danhausen revealed some precious advice that he imparted to Warhorse prior to his big match. He said that Warhorse should “punch them right in the groin.”

Warhorse didn’t listen to Danhausen’s advice, so there was no groin punching. Still, Danhausen was very happy for his friend that he was able to wrestle on Dynamite.

“We don’t know, maybe he’s ducking Danhausen. Danhausen must have scared Arn Anderson. Danhausen told Warhorse, gave him some advice. He called him before his big match because Danhausen had to rearrange his library, his books, so he could not be there. So Danhausen said, ‘hey, when the match starts, you punch them right in the groin before the bell rings.’ He didn’t win. This is probably why he lost to be honest.”

“Danhausen was very happy for him. Danhausen believes that some people thought maybe Danhausen was going to be angry it wasn’t he who had the spot. Danhausen could not be happier for Warhorse.”

Danhausen was just hired by ROH, but he must win a match in 2020 in order to make it official. People seemed to gloss over that stipulation of the deal, but he has full faith that a W will be his as soon as he infiltrates the ROH bubble once again.

Warhorse might get another shot at Cody someday. Some fans still believe that Cody fears him. Perhaps next time they meet Cody should wear a cup in case Warhorse takes Danhausen’s advice.