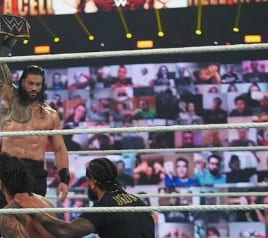 Last night at WWE Hell in a Cell, Roman Reigns kept his strong run with the Universal Championship going as he beat Jey Uso to retain the title inside the demented structure.

While the Cell itself didn’t play much of a role in proceedings it certainly added to the drama to a degree, and when the dust had settled, The Tribal King was the man standing tall.

Based on his reaction on social media, it seems as if Reigns may be ready to move on from this feud and onto something new.

This feud has been one of the most thrilling things on WWE television across the last few months and now, the only question that remains is where will both men go from here?