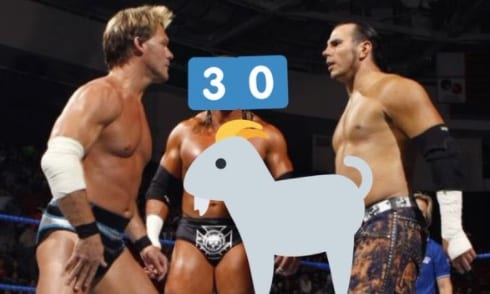 Matt Hardy and Chris Jericho have had many showdowns over the years in both WWE and AEW, and it does feel like they’re destined to square off once again sooner rather than later.

Alas, as All Elite Wrestling prepares to celebrate 30 years of Jericho on Dynamite tonight, Hardy doesn’t have it in him to ignore the incredible milestone that Chris has been able to reach.

As such, he has taken to social media in order to give his thoughts on this iconic moment in Jericho’s career.

I’ve been fighting against & with @IAmJericho for OVAH 20 years. Regardless of what I personally think about him, this legit GOAT deserves his day tomorrow. #Jericho30 #AEWDynamite

Eagle-eyed viewers certainly won’t overlook the fact that he’s jokingly decided to cut Triple H out of the above picture, but the real focus over the next 24 hours will still be on the man formerly known as Y2J.