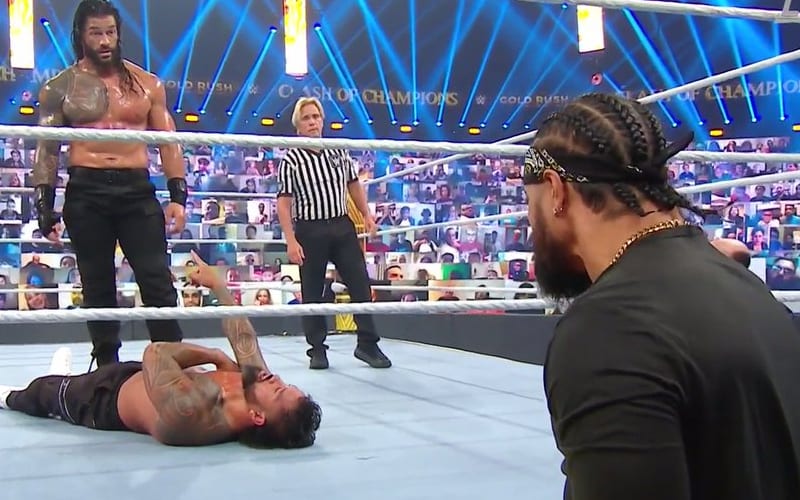 Jey Uso and Roman Reigns will battle once again at Hell In A Cell. That match will be inside the unforgiving cell structure. Jey isn’t letting this opportunity pass him by.

During Talking Smack, Jey Uso was asked by John Morrison if he’s ever seen Roman Reigns’ hair when it wasn’t wet. This seemed like an attempt to break Jey’s character a bit, but Uso kept a straight face and said that he hasn’t seen the Big Dog with dry hair.

Then Kayla Braxton redirected the line of questioning to ask Jey about his opinion of Jimmy throwing in the towel for him. Jey Uso seems ready to take on Roman Reigns and handle him before dealing with what Jimmy did at Clash Of Champions Gold Rush.

“Kayla, we’re gonna handle that at a different time. Everyone saw what happened on Clash Of Champions on Sunday. He’s gonna say that I disrespected the family, he disrespected me, he embarrassed me. So he done hit a switch, he hit a nerve, Uce. Uce, you hit a real nerve. All this right here, yeah we know what it is, but you, Joe, you hit a real nerve, Uce and I’m gonna see you at Hell In A Cell.”

When Kayla Braxton asked Uso if he plans on calling Roman Reigns his “Tribal Chief,” Jey walked off instead of answering her. We’ll have to see what they have in store for fans at Hell In A Cell, but Jey Uso is bringing the fight to his cousin.