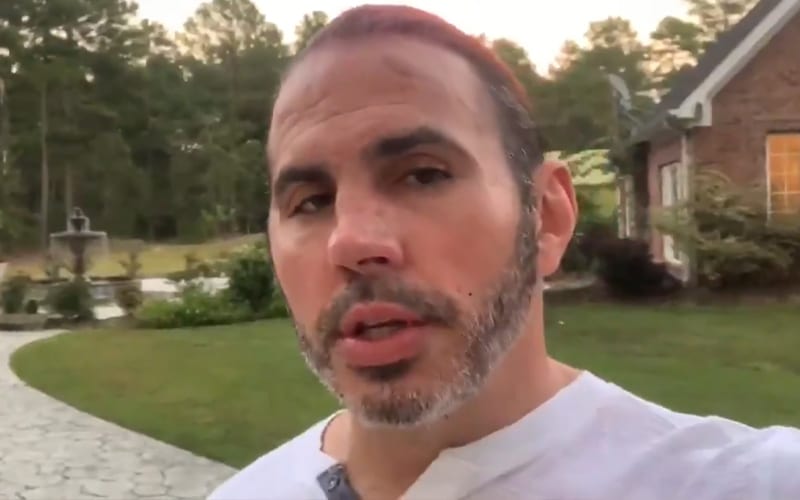 Matt Hardy took a very bad fall at All Out. He was knocked out and the match was stopped only to later be re-started. They went to the final spot of the match, and Sammy Guevara took a fall. Now Hardy is taking some time off.

Click here to watch that scary fall from AEW All Out.

Hardy updated his fans via a Twitter message. He ensured everyone that he is okay, and he’s going to be okay. Matt Hardy is human, but he’s able to get up from terrible bumps, and he’s done it once more. He is also humbled to know how much the fans really care about him.

“Hey, everybody. I want to take a very quick minute and make this video to Tweet afterward,” Hardy said. “I just want to say to everyone out there who has sent me a message, or texted me, or DM’d me, or sent me a tweet or on Facebook, whatever it may be – there were so many. It was overwhelming and so humbling over the last few weeks. I’ve had a rough run the last few weeks, but so many people have reached out to check on me, and my condition, and health. There was just so much concern, and I’m so appreciative and humbled by it.”

“I just want to say thank you and let you know I’m okay and I’m going to be okay,” Hardy said. “I get knocked down a lot, but I’m going to do my damndest to get back up and I’m going to be 100% fine when it’s all said and done. I want you guys to keep that mentality as well because we’re living in a very difficult time. 2020 has been a rotten year, and I hope you stay strong because tough times call for tough people. I’m going to let you know I’m also planning on being on AEW Dynamite this week. I plan on being there, and I hope while I’m on All Elite Wrestling Dynamite, you are able to kind of get away and escape from the world. And hope I can put a smile on your face and entertain you.”

There was a lot of finger pointing when Hardy took a fall like that and was able to continue wrestling. His wife Reby Hardy was especially furious about the situation.

Matt Hardy will be resting up at home for the time being. No return timetable has been discussed that we’ve heard about, but he did promise to look toward the AEW World Title upon his eventual return.