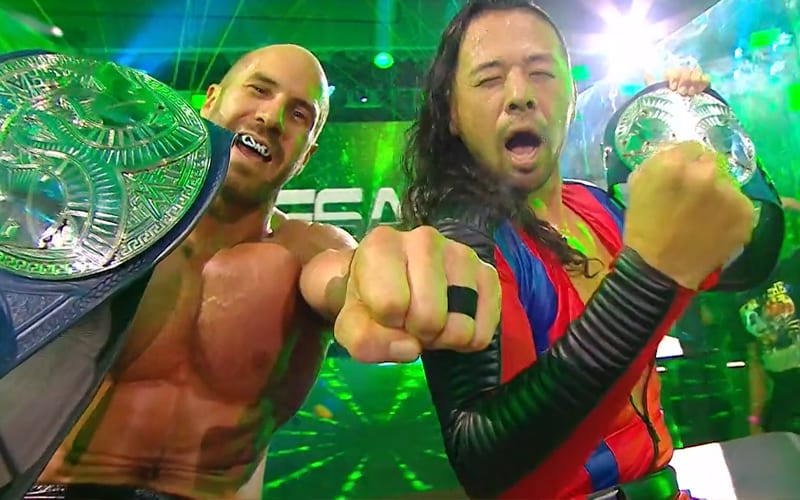 The tag team division in WWE is heating up, especially for the champions. SmackDown Tag Team Champions Shinsuke Nakamura and Cesaro recently had a little feud with the Street Profits. We’ll have to see if they meet again.

During SmackDown this week, WWE aired a pre-taped video promo in a picture-in-picture on the screen. Wrestling News reports that WWE aired the wrong promo in that box because it included a line about cancer that wasn’t supposed to make the final cut.

Shinsuke Nakamura took a dig at the Street Profits’ catchphrase as he said: “If they want smoke, they will get cancer.” When the went back to the desk, Michael Cole quickly rephrased what Nakamura said by saying: “Cesaro and Shin saying if they want smoke, they’re gonna get some here tonight.” They apparently aired the wrong video.

We were told that the cancer line was not supposed to make it onto the show but with so much happening behind the scenes someone simply forgot to use a different version of Nakamura’s promo.

If you were wondering what was happening behind the scenes, you can read Ringside News’ exclusive report about a match that Vince McMahon hated so much that he wanted to end it during the commercial break.

Shinsuke Nakamura and Cesaro are set to defend the SmackDown Tag Team Titles at Clash of Champions against the Lucha House Party. We’ll have to see if WWE makes a change in their champions on September 27th.