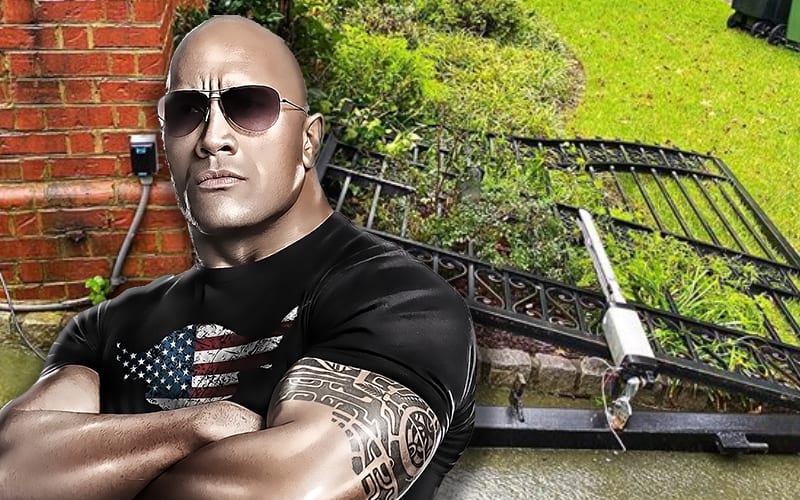 The Rock is a very powerful man, both literally and metaphorically. It’s best not to try and trap him anywhere, even his own home. He recently had to prove this fact by ripping off the gate to his own home.

Dwayne Johnson sent out an Instagram post letting fans know about his recent situation. His power was out, and the gates wouldn’t open. He only had one choice to get those hydraulic gates open and it required him using some of that Brahma Bull strength.

Not my finest hour [facepalm emoji], but a man’s gotta go to work.

We experienced a power outage due to severe storms, causing my front gate not to open.

I tried to override the hydraulic system to open the gates, which usually works when power goes out – but this time it wouldn’t.

Made some calls to see how fast I can get the gate tech on site, but I didn’t have 45min to wait.

By this time, I know I have hundreds of production crew members waiting for me to come to work so we can start our day.

I pushed, pulled and ripped the gate completely off myself.

Ripped it completely out of the brick wall, severed the steel hydraulics and threw it on the grass.

My security team was able to meet the gate technician and welders about an hour later — and they were apparently, “in disbelief and equally scared” as to how I ripped it off [laughing emoji]

Not my finest hour, but I had to go to work.

The Rock proved once again that he’s all about mind and muscle. It took some thinking to get around this situation, but ultimately, he had the inedible power to pull it off.

It also stands to reason why someone would be scared around a man who just ripped his own front gate off its hinges. Just imagine what he could do to you if the job isn’t done correctly to fix it.