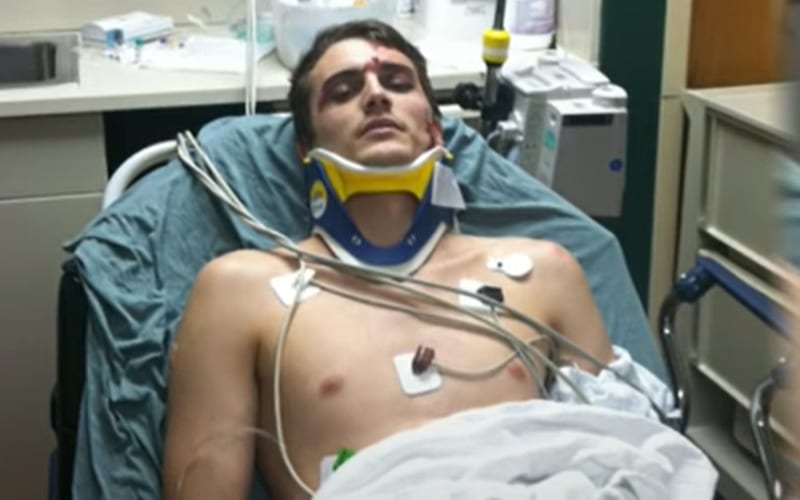 WWE commentator Vic Joseph is happy to be in WWE, and it almost never happened because he nearly died in a car accident even before his path was set toward WWE.

While speaking to Corey Graves on After The Bell, Joseph revealed that he was in a car wreck where he went “from the backseat through the front seat.” He had to go to speech therapy and learn how to talk again. He still has scars and glass in his face to this day.

“I was on the side of the road — white sheet over me — I’m not joking, I’m being dead serious — and I moved and I remember them going ‘Oh he’s alive!’ And they ran and got me and put me on a gurney and they cut my shirt off and I made a joke, like an off-handed joke about Ohio State and Michigan because I think I was wearing a Michigan shirt.”

Joseph knew what a shopping bag was, but he couldn’t tell you what it was. That was going on with his situation. He lost out on jobs in sports announcing because of the accident.

This was a terrible experience for Joseph, and a huge detour. Then his path was set toward WWE by two ECW legends. He was convinced to get out of the house and go to an indie wrestling show. That is where he met Rhino first.

“[Rhino] and I are closer than anyone would care to know. He’s family to me. He said ‘start jumping in the car with me on your off weekends,’ because I wasn’t doing anything [because of the accident].”

“So every weekend I was in the car with him. I drove with him from city to city. I think people thought, ‘oh it’s just the veteran getting someone to drive them around and do their bidding.’ He let me pick his brain for hours in the car. He introduced me to person A and then person B and then person C and then finally got to Tommy Dreamer.”

Vic Joseph said he was with Tommy Dreamer on the day his new promotion House Of Hardcore started. He looked at Joseph and asked, “do you want to call the show?” The rest is history, and Vic Joseph eventually ended up in WWE. It took quite a road to get there.

You can check out Vic Joseph telling the entire story in the video below.