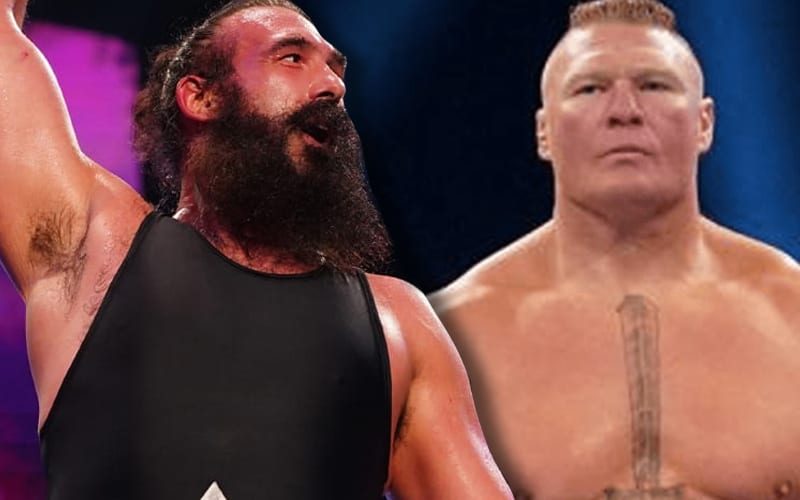 Brock Lesnar is a free agent now after his WWE contract expired. This kind of thing has happened in the past, but this time it took long enough that his merchandise was pulled from WWE’s official shop.

At this point, Lesnar has not spoken to UFC or AEW. The thought is still out there that he might. Brodie Lee has locked horns with Brock Lesnar in the past and he’s not afraid of him.

Brodie Lee spoke to Wrestling Inc about the chances of Brock Lesnar coming to AEW. It doesn’t worry him much, in fact, he doesn’t really give a sh*t if Lesnar is interested in teasing AEW.

“I mean you have to look at every free agent, especially one of the magnitude of Brock Lesnar. From a business side of things, you have to look at that. From a professional wrestler side of things, I’m not sure that he’s the best fit for AEW, but again, I’m not management. I’ve been in the ring twice with him. So I’m clearly not afraid of him. So if he was to be here, I mean I have a championship so if he wants to start somewhere, I’ll welcome him.”

“I think we got enough monsters here to be to be fair, and like I said, if he wants to be the monster in town, then he’s going to have to come through a few of us. That’s the thing man, I don’t give a s–t. If you’re going to tease coming to the company, then you have to expect this, and like I said, I’m not afraid of anybody and this is what I do for a living, so let’s do it.”

Brodie Lee is AEW TNT Champion and if Brock Lesnar wants to face him then that would be find with the Exalted One. Odds are Lesnar is holding out for another huge Vince McMahon payday. You also never know what can happen in pro wrestling.