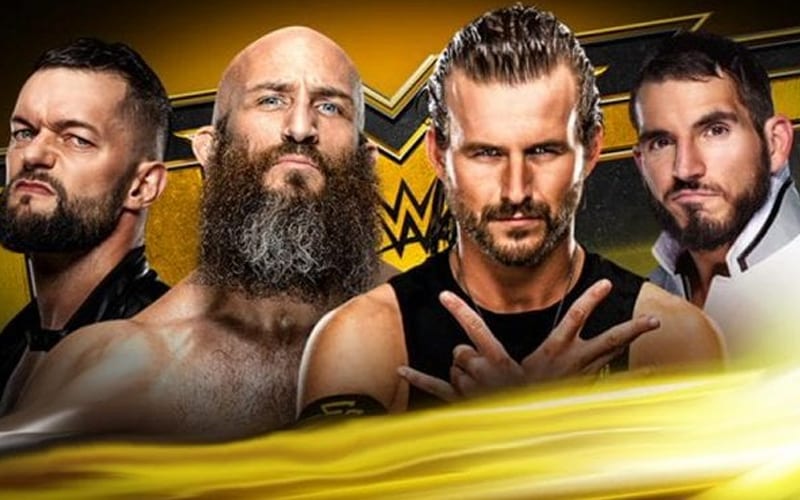 NXT is on a Tuesday thanks to the NHL post season. The big NXT Title match is going to be a long contest. They also filmed it last week. Click here for a MASSIVE SPOILER on that match.

Breezango and Isaiah “Swerve” Scott are also teaming up to face Legado del Fantasma. They also booked a match with Bronson Reed vs Timothy Thatcher.

This is a street fight.

The match got started quickly as Legado Del Fantasma jumped on Breezango and Swerve during their entrance.

They fought outside ring brawling and teasing using a table. Breeze took a bump into the hockey boards and so did Swerve.

Mendoza wedged a chair in the corner and then Swerve dropkicked him into it. They brought a ladder in the ring as Breeze hit a backstabber. Wilde took a bump into the guardrail on the other side.

Fandango put the ladder on his head and pulled a Terry Funk as he spun around taking everyone out. Mendoza took a bump on the groin and then Scott pinned for a two count.

Swerve nailed Escobar with a knee. Fandango brought in a fire extinguisher and Breeze sprayed Legado del Fantasma as the show went to commercial.

Scott fought off Legado del Fantasma. Legado del Fantasma brought Prince Pretty to the ramp and Imperium ran down to beat down Breeze. Then they rolled him in and suddenly, Scott and Dango were on the top of a forklift which they jumped off of to attack the heels. Then Breezango jumped on everyone on the outside.

Swerve got the pin on Escobar.

Kayden Carter came out with Kacy.

Catanzaro started out fast and then Candice hit a neckbreaker and kicked Kacy out of the ring. Carter gave Kacy a pep talk and Candice rolled her back in.

Then Kacy went on the defense, then she caught an elbow to slow her down.

Kacy fired up and nailed some punches in the corner and a clothesline. She hit another move and got a two count. Then Candice got a stretching submission before stomping her head to the mat and getting the win.

After the match, Candice cut a promo about Tegan Nox. She told Tegan to “swing by my house, dinner’s on me.”

Rhea Ripley cut a promo backstage about Mercedes Martinez. She’s going to have to rip her limb from limb. She wants a steel cage match. Cool.

The two felt each other out to start out. Reed finally put Thatcher on the mat and he kicked him until Timothy got up, then Reed smacked him back down.

Reed nailed a running senton and pulled Thatcher back up to continue applying abuse until Thatcher returned fire and took Reed down. Then Bronson Reed showed Thatcher down and he hit a spingboard elbow drop. Thatcher went outside the ring and Reed nailed a dive on him.

Suddenly, Austin Theory came down and took Reed out before rolling him back in. Thatcher locked on an armbar and Reed tried to get out of it. Finally, Reed had to tap out.

Click here for the spoiler for this match. We’ll just keep up with the main points so this isn’t a Grapes Of Wrath sized summary.

They all took their time and got to have fresh competitors come in to make sure nobody got too tired early on. There were no real pinfall attempts as they just wore each other down.

Gargano got a near fall on Cole, and then Cole returned the favor. Soon they were all down on the mat after landing kicks and knees all around.

Later on, Balor got another close two could after nailing a 1916 on Gargano. Then Balor hit a shotgun dropkick and scaled the top rope to miss a Coup De Gras. Tommaso planted Balor for a two count.

The action was constant with one move after another. They cut to commercial. Twenty minutes, and no pinfalls so far.

They were all tied at no pinfalls. Cole and Balor met in the ring, they did a Too Sweet, and then Balor turned on Cole and he took everyone out with a dive and then he hit Ciampa with a shotgun dropkick on the outside before hitting Gargano and Cole, too.

When we came back from commercial everyone was outside and Ciampa was firing away at Cole. Then Balor saved Cole from getting catapulted into the bottom of the ring. Ciampa nailed a Willow’s Bell on Balor and a Fairy Tale Ending. Gargano then threw Ciampa out of the ring and stole a pinfall. Johnny Gargano Picks Up The Second Fall.

Cole nailed Ciampa with a Last Shot, but he kicked out of a pinfall. Cole’s Last Call was blocked by Ciampa with a lariat. Balor nailed a Sling Blade, but he was stopped from capitalizing. Cole then nailed a Panama Sunrise on Gargano for a pinfall. Adam Cole Scores The Third Fall.

Ciampa nailed a Double Willow’s Bell on Cole and Gargano before hitting a Fairy Tale Ending on Cole for a pinfall. Tommaso Ciampa scores the Fourth Fall.

We’re back at everyone being even.

It soon became a stalemate again as everyone was on the ground for different reasons after hitting each other with strikes.

They continued as Cole and Ciampa fought on the apron before Ciampa was knocked into the ring. Cole climbed up and Ciampa caught him. They continued on through another commercial break without a pinfall.

Balor took out Ciampa’s knee later on and locked him in a Boston Crab, but Ciampa got to the ropes. Balor climbed up top, and he fought off Gargano, and he missed a Coup De Gras. Cole nailed a Superkick and then Gargano hit Cole with a Superkick to take him out of the ring.

Gargano hit a dive on Ciampa and then on Cole. He went for a dive on Balor, but he blocked it and tried to hit a DDT, but Gargano reversed into his own DDT before they cut to commercial.

Gargano’s Superkick was blocked by Cole. Then Cole missed a Last Shot and Gargano locked in a Gargano Escape. Cole tried to roll out of it, but Johnny tightened his grip.

They all moved outside and Ciampa nailed everyone with punches. He drove Balor against the hockey boards. Then Ciampa chopped Gargano down and he hit a suplex on Cole on the outside.

Ciampa and Gargano slugged it out and Ciampa hit Johnny with that catapult under the ring. He rolled Gargano into the ring and Cole broke up a pinfall. Then Balor broke up the second pinfall attempt.

Gargano got a near fall on Ciampa with a cradle pin. They were all tied up at 1 pin each and there was 1 minute left.

Ciampa backed Johnny into the corner and chopped him. They went up top and Ciampa nailed Gargano.

Balor and Cole will battle next week for the NXT Title.