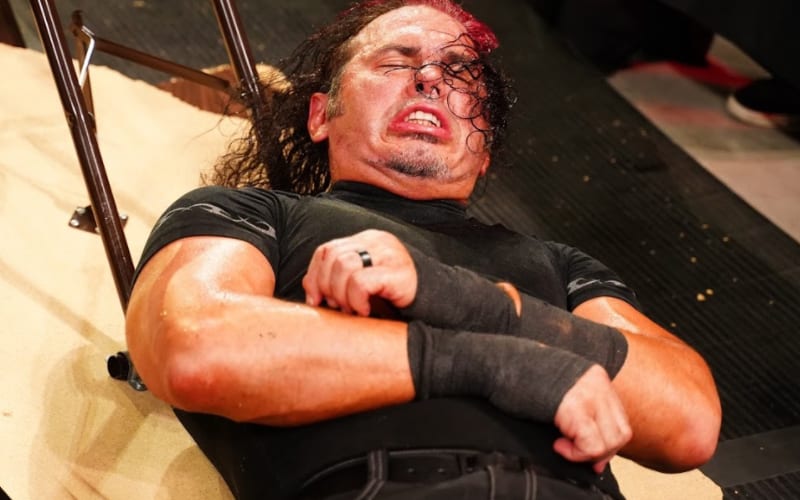 Matt Hardy arrived in AEW, and there are a lot of possibilities. He was wrapped up in a heated and bloody feud with Sammy Guevara, but there were apparently plans for it to happen in a different way.

While speaking to TV Insider, Matt Hardy revealed the original plan AEW had for his match with the Spanish God. The coronavirus lockdown caused Matt Hardy and AEW to change those plans.

He then revealed that the initial idea from the beginning was to feud with Sammy Guevara through Chris Jericho. He still has hope that a Hardy Compound match will happen in the future.

“In all actuality, when we first started doing all that, the original plan, I think, was to have the cinematic match with Sammy. I challenged Jericho, but the idea was for it to get pushed off to Sammy. Things went differently when North Carolina and other states went into lockdown. There was this six-week period where AEW literally survived on a day or two of shooting footage, which was pretty amazing. They did an incredible job. Kudos to the crew. We had to change course in many ways. From the very beginning, I was going to end up having a feud with Sammy, and Jericho was my bridge to get to that. As far as the Hardy Compound fight with Sammy, that may happen one day. We’ll see.”

AEW was able to put Sammy Guevara and Matt Hardy in a tables match this week on AEW Dynamite. Since Guevara won that match it’s reasonable to assume that the two of them will meet again. Hopefully, that cinematic match will take place, but the COVID-19 pandemic didn’t allow for their first attempt.