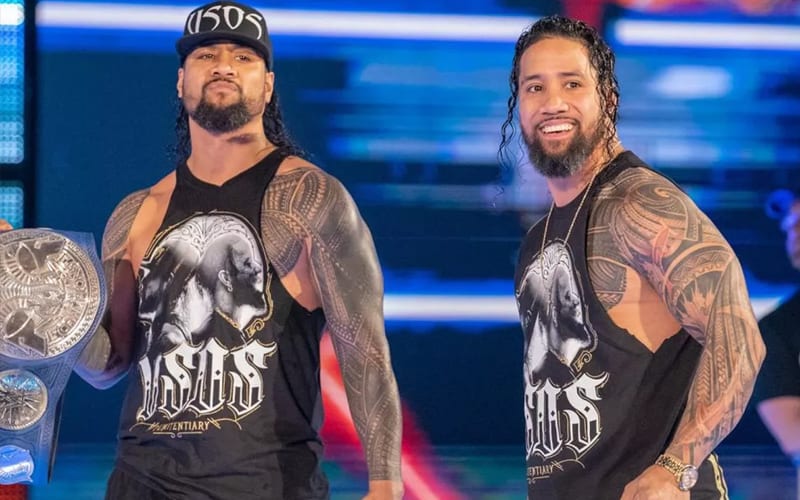 Jimmy Uso injured his knee, and he required surgery. Now he is waiting for his return as his brother Jey also antcipates the day when their team will re-form.

Ringside News was the first to exclusively report that Uso was injured. Since he was taken out of the picture, the Forgotten Sons were slid in, but then a bad tweet caused them to lose not only their push, but a title run as well.

While speaking to D-Von Dudley’s Table Talk, Jimmy Uso provided an update on his injured knee. That ACL is healing, but he can’t rush it. He did seem very hopefully that he’ll be rolling again in 2021.

“Right now, I’m working on this knee injury. I’ve never had any injury in my life, period. Through football, putting my brother through tables, doing all this crazy stuff we’ve done, I’ve never had an injury. To get hurt at WrestleMania this year, I didn’t know what to do. I was sitting there wondering, ‘Do I be mad? Do I be sad and worried?’ You just have to take it one day at a time. Luckily, I have a great family I could go to.”

“A lot of the guys that have been hurt, it’s just hard to turn off. It’s hard when you get home. You are moving so much that it’s hard to turn off; it’s just hard. My wife [Naomi] tells me I need to stop worrying and stop watching SmackDown or RAW and just turn it off. So, I’ve been trying to do that and just hang out.”

“I don’t like hospitals. I don’t like doctors, I don’t even take medicine. I don’t like any of it, so to sit there and have to go under with the whole gown on having surgery – yeah, I tore the ACL and now we’re looking at January. Hopefully we’re back and ready to roll.”

A January return date seems likely for Jimmy Uso, and it could be perfect timing for the Usos to jump on the road to WrestleMania 37. This time of rehabbing an injury certainly wasn’t planned for Jimmy Uso, but it seems like he’s making the best of it. He also hasn’t forgotten about pro wrestling as he continues to watch on a weekly basis.