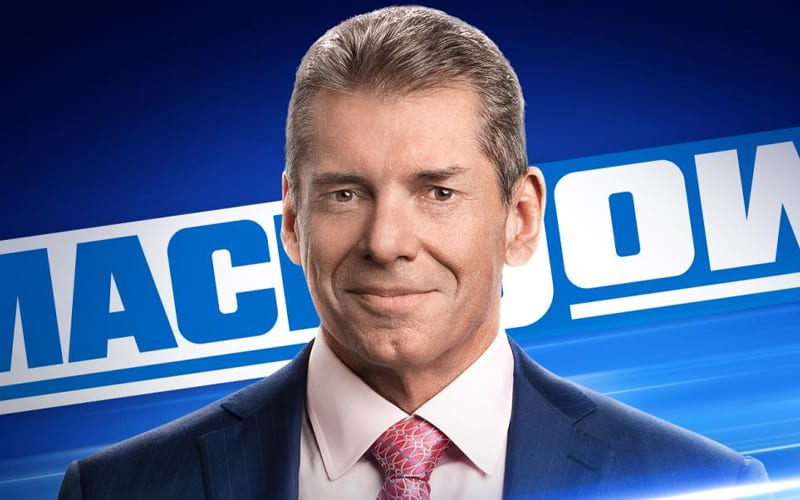 Tonight is the big night when the ThunderDome will debut for the WWE Universe. It will be quite a show and Vince McMahon is making a rare appearance.

The Lucha House Party will get a SmackDown Tag Team Title shot against Cesaro and Shinsuke Nakamura. This is the go-home episode before SummerSlam, and those titles aren’t being defended so far.

AJ Styles is also putting his IC Title on the line. He will battle Jeff Hardy. Also, Retribution is still around and you never know if they could try and wreck the ThunderDome.

Big E is also continuing his singles run as he takes on Sheamus.

Braun Strowman will be around to add the finishing touches to his feud with Bray Wyatt before SummerSlam as well. All that and more is expected for WWE Friday Night SmackDown.

They started with pyro. Welcome to the ThunderDome (no mention of the Amway Center).

Vince McMahon came out, actually he was already in the ring. The virtual fans were all around the ring. Vince said we’ll never see it coming at SummerSlam.

Then the lights started going down and The Fiend came out. Vince didn’t move as The Fiend made his way to the ring with a sick new ThunderDome entrance.

Bray approached Vince and they just stood there for a moment. Fiend started laughing and then Braun Strowman came out.

Then Retribution surrounded the ring and there were more than ever before. Braun and Bray smiled at each other and then the lights went out after Bray waved. Then lights came back on and Braun was all alone.

Then Retribution got in the ring and mauled Strowman. There were at least a dozen of them and Braun finally went down. Finally the locker room emptied led by Big E.

The Superstars and Retribution continued brawling. Then the heels came down. They were all brawling and NOT ONE SUPERSTAR THOUGHT TO TAKE THEIR MASKS OFF!!!

They started this match which was planned for later on in the night.

Sheamus hit an Irish Curse Backbreaker for a two count and the lights started to flicker again.

When we got back from commercial, Big E started hitting German Suplexes. Big E hit a splash and Sheamus out got of a Big Ending. Sheamus went for a Brogue Kick, but Big E ducked. Then Big E caught a knee to the face.

Sheamus nailed Big E in the face a couple of times and Big E got out of a White Noise. Big E hit a uranage slam for a two count.

Big E caught a knee to the face when he tried for a spear through the middle ropes. Then Big E blocked a chest chop from Sheamus. Big E caught a post and then Sheamus hit White Noise.

Corbin nailed Matt Riddle at ringside for some reason. Then they started brawling just as Sheamus was about to hit a Brogue Kick. Sheamus was distracted, Big E got a roll-up and won. That was a cheap way to get a win on Big E that should mean a lot more than it did.

They took us back to the trainer’s room where Jeff Hardy was there and in pain. He was getting treated and it looked like it was his ankle.

Metalik and Cesaro started out, and Cesaro caught Metalik off the ropes and powerbombed him down. The Miz and John Morrison were watching backstage.

Nakamura took the tag and then he worked with Metalik for a bit before he tagged in Cesaro again. Cesaro tried to do a move from the second rope, but Metalik stopped him. Then he hit a rana off the top on Cesaro that sent him flying.

Kalisto cheered on at ringside as Lince Dorado took the tag. Then Dorado hit a cross body block and Shinsuke missed a splash. Dorado kicked Nakamura and then he jumped over Nakamura and flipped down the ring. They traded kicks and Dorado hit three moonsaults for a two count.

Metalik hit Cesaro with a splash off the top and then Nakamura hit an inverted exploder suplex. Nakamura kicked Metalik again. Then Lince avoided a Kinshasa and he hit a springboard stunner.

Then Cesaro took the tag and he had to kick out of a roll-up pin. Then Cesaro rolled Dorado up with a gorgeous reversal for the win. Cesaro is seriously so good.

The Lucha House Party had a squabble after the match.

They revealed in replay footage that AJ Styles caused Jeff Hardy’s injury. Then Styles cut a promo backstage on Hardy. Styles walked up on Banks and Bayley. Then they toasted with their titles.

Mandy Rose was interviewed backstage by Kayla Braxton. She no-sold the home invasion and kidnapping situation. Then she spoke directly to Sonya who wasn’t there. Mandy asked to put this all behind us and “choose to see the good in you.” Those two will fight on Sunday with their hair on the line.

Bayley and Banks came out. Corey Graves was in the ring with them. Bayley cut him off to put them over. Graves asked if they were implying that Asuka can’t beat them.

Bayley said everything they do is for a reason. That’s why they have all the gold. Corey brings up Kairi Sane and how Asuka might want to beat them both up for Sane leaving.

Bayley said there’s nobody in the locker room who can touch them. Then Naomi came out. She wanted to face both of them.

Banks and Bayley must beat Naomi and who ever beats Naomi quickest gets to face Asuka 2nd at SummerSlam. How the hell is this Naomi getting better?!

Banks laid in knees to Naomi in the corner and softened her up and then Naomi landed a springboard kick to the back of Banks’ head as she was draped over the top rope. Banks tried to roll Naomi up, but got a two count.

Then Banks took Naomi down quickly and into the Bank Statement for the submission at 3:39.

Bayley rushed the ring and landed a knee to Naomi’s head immediately. Then Bayley started pummeling Naomi and stomping on her.

Then Naomi returned fire with a Rear View and won. Banks was way happy about this.

Asuka came out and cut a furious promo. Then they piped in crowd noise when she said her catchphrase. Asuka rushed the ring and Bayley left as Banks was left on the ramp.

Sonya Deville was backstage. Dana Brooke ran up and said “I’m sorry for everything you went through this week.” Then Deville slapped the crap out of her and said “it’s nothing I can’t handle.” That was intense. Deville is coming into her own here.

She made them cut the music. She isn’t backing down from SummerSlam. She doesn’t understand what Mandy wants. Because she’s going to end up facing her at SummerSlam.

Then Sonya said they raise the stakes. It’s also a no DQ match and the loser leaves WWE. She realized hair or no hair she’s sick of looking at her face.

Nikki Cross cut a promo saying that Alexa Bliss has been different.

Styles went right for Hardy’s knee and kept at it. Hardy kept selling his knee. This was the story for the first few minutes and continued. Styles kept stomping on Hardy and then he fought back a bit with a jawjacker.

Then Hardy lifted Styles over the ropes and to the apron, but Styles fell to the floor. Styles pulled Hardy to the floor and they cut to commercial.

Styles kept working on Hardy and then Jeff returned fire with a facebuster. Styles came back with a Pele Kick.

Hardy tried to do a Whisper In The Wind, but his leg went out on the top rope on purpose and he fell. Hardy returned fire on Styles and hit him with a shot to the gut off a springboard.

AJ went for a Styles Clash, but Hardy hit him in the face with his knee brace. Then he hit a Twist Of Fate and climbed up to hit a Swanton Bomb and win the IC Title.

AJ Styles was backstage and he was yelling at Joseph Parks

Bray told us that he loves us. Awww. Then he said love can be a terrible thing. It’s just a way to trick you into burden. It can cause an angel to crash down with broken wings. Too much love can turn sunflowers into a wasteland.

Then Bray started listening to his Hurt glove. He then played a little clip of Braun and Alexa played by Huskus The Pig Boy and Ramblin Rabbit. It almost got TV-14. Wyatt stopped them and said that’s not how it went down. Huskus said he’s a method actor. Ramblin got lost in the moment.

Bray Wyatt said The Fiend can’t wait to get his hands on Braun. Then Braun Strowman jumped Bray Wyatt in the Firefly Fun House and beat him down in his safe space.

Then he dragged Bray Wyatt off. Cut to commercial.

When we came back from commercial, Cole and Graves were trying to explain what they just saw. They moved to the back of the Amway Center while calling it The ThunderDome the entire time.

Braun then chokeslammed Wyatt off a loading dock while the referees were trying to get him to stop. They acted like this was very serious. There was no blood, but Wyatt wasn’t moving. They immediately had an ambulance there (imagine that?) then they loaded up Wyatt.

The ambulance left, but then it stopped. It started backing Adam Pearce tried his best to keep shouting and selling this. Then ambulance opened up and The Fiend was standing there. He started laughing and that’s the show.