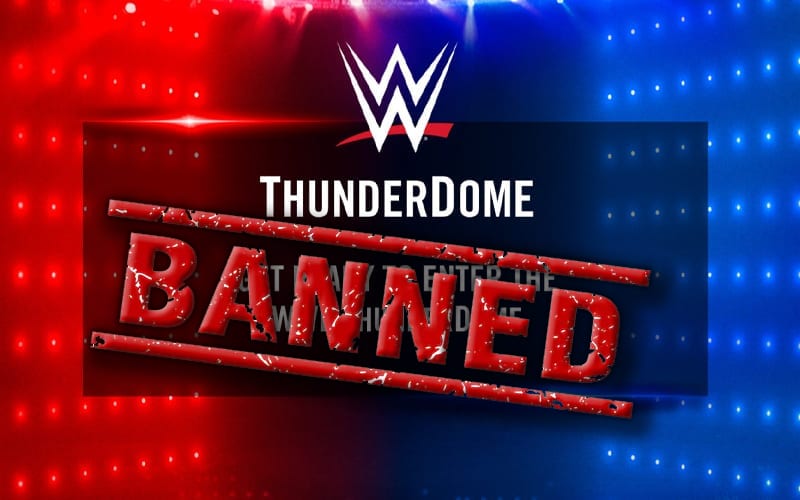 The WWE ThunderDome “sold out” in a hurry. This free virtual fan experience will be unlike anything WWE has ever done before and they want to make sure that fans know not to try anything clever while they’re on the air.

A ton of fans are upset that registration closed off. They can try again later. Those fans who did receive invitations to be a part of the broadcast were told in very straight-forward language that they can lose their spot if they don’t mind the rules.

You can click here for a list of the WWE ThunderDome rules. Those fans who got a seat for a virtual experience were sent additional information that made it very clear that WWE will enforce those rules.

This first-come, first-serve basis virtual fan experience is a privilege, and WWE said they “reserve the right to remove you from the live stream at any time, for any reason.”

All registered fans are further selected on a first-come, first-serve basis. Please make sure you are camera ready. Remember, you will be appearing on a live show. We reserve the right to remove you from the live stream at any time, for any reason. The audience will be refreshed throughout the night and you may not be included in the entire broadcast. In addition, we may remove you from the live stream for any inappropriate conduct or technical issues.

Position yourself in front of the camera from your midsection up, leaving a little room above your head. Make sure you have good lighting. Only one fan permitted per seat. Your attire must be appropriate and must remain on at all times. Officially licensed WWE clothing is preferred, if available. We reserve the right to terminate your participation at our sole discretion.

By them saying: “Officially licensed WWE clothing is preferred” it probably means that they’ll yank you off the stream for sporting an AEW t-shirt. We’re sure that someone will try it so fans will know for sure soon enough. We’re also relatively certain that someone will try to break the “attire must be appropriate and must remain on at all times” part of those rules.

WWE programming has been missing a lot since fans left. Now they are coming back in a very unique way. WWE fans have always found clever ways of having their voices heard in the past. Let’s see what they do when entering the ThunderDome.