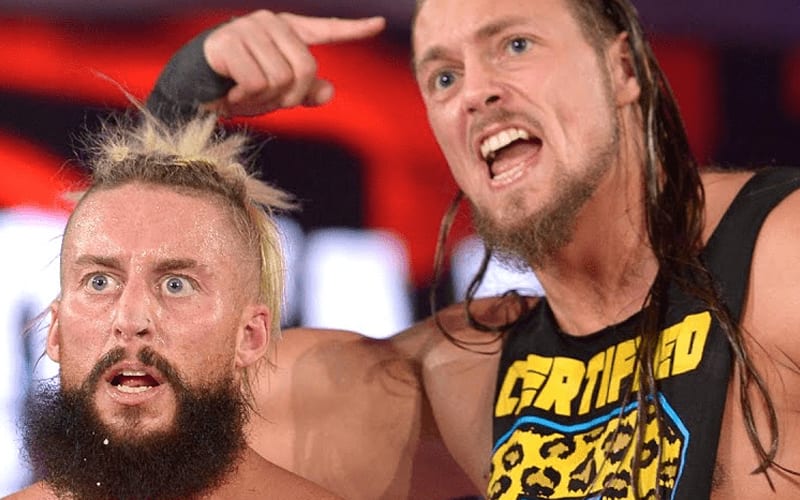 Enzo Amore & Big Cass were the realest guys in the room for a while and they sold a ton of “How You Doin’?” merchandise. That didn’t translate into the longevity that they thought.

Amore and Cass were released from WWE months apart from each other, but for totally different reasons. NZO was released first after allegations came out about him. No charges were ever pressed and he certainly wasn’t convicted, but WWE axed him anyway. Big Cass was released a few months later for behavioral reasons. Both of them still had merchandise in the pipeline that came out months following their sudden releases.

During the ARN Show, The Enforcer spoke about Enzo and Big Cass. He said that the team had a following when they made it to the main roster which was hard to ignore.

“When you come up to the main roster, you’re on TV now. You can take 200 people in a crowd of 10,000 and if they choose to be heard, they sound very loud. I’m talking [about fans] scattered around the arena. If they’re chanting the same thing, 200 people can make a lot of noise, they really can. The fact is they did have that following. They came up to the main roster. They had a match or two, and the people were getting with the promos and getting with all the things.”

Big Cass and Enzo Amore eventually broke up. Then Cass had a program with the Big Show that was supposed to put him over. Arn said that Cass simply stopped listening at that point.

“The second they put Cass in the program with Big Show, he quit listening. I know because I was the producer of that match. Here’s the giant willing to put this guy over and he was fighting us every step of the way.”

Enzo Amore became Cruiserweight Champion, which is a title he never officially lost. He still has that title and isn’t afraid to bring it along with him to indie shows.

Arn Anderson said that Amore’s reign as a heel champion came with him not listening. He contributed both Enzo and Big Cass’ downfalls to their unwillingness to listen. Eventually that led to their self-destruction.

“Same thing [with] Enzo. I had him in some 205 matches on house shows, and he was just doing every stupid thing you could do to make a babyface look foolish. It was some of the Lucha guys that he was working with and they didn’t know the difference until I started pointing it out to them.”

“I think the fact that you don’t take the guidance from the producers that are there to help you and know a little bit better than you do [about] what’s going to get over — and when you quit listening and you just decide [that] you’re a bigger star than they are an assist to your success and you’re going to do it your way, that’s where you get started heading downhill.

The book isn’t closed on Big Cass and Enzo Amore. Following a departure from the spotlight, Cass is said to be in the best shape of his life. NZO hyped how great Cass is doing, but we still haven’t seen them perform as a duo in quite a while.

Vince McMahon is also known for giving second chances. Perhaps Big Cass and Enzo Amore can prove themselves and get another opportunity to perform on WWE’s big stage.