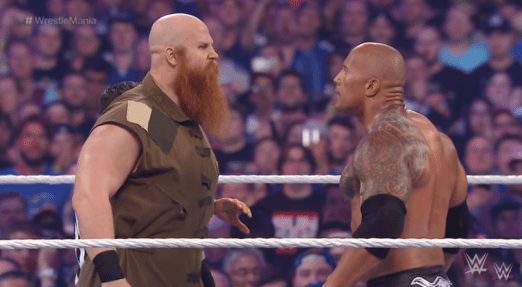 Before 2016, no one would have thought that Erick Rowan of all people, would get to go one-on-one with The Rock at WrestleMania. However, that is precisely what happened at WrestleMania 32.

The Great One triumphed over Rowan in six seconds and then teamed up with John Cena to even the odds against The Wyatt Family.

He said that he went from not performing on the show to going one on one with The Great One and regardless of the outcome of the match, it was nothing to be upset about.

We usually used to leave on Monday or Tuesday after SmackDown taping, which is Friday now. We usually leave the taping and go to whatever town we have the signings and Access appearances. I think it was at Dallas. We were there and we went from not having a match at the event to being called and told that ‘oh hey, you know, you’re probably going to have a quick little thing with The Rock and it’s going to turn into a match between you and him.’ I was like oh sweet. And the it was going to be this and I went ‘oh ok, oh well.’ You go from not having anything to do on the show to having a thing with The Rock in front of . You can’t be upset about that it’s The Rock and it’s in front of a hundred thousand people there. That itself was an experience. Even though you didn’t get to do what you wanted to do, it’s still an experience and I’m ever grateful for that experience.

Losing to the Great One is also a thing of immense honor for a Superstar. If The Rock doesn’t participate in another match in the company, Rowan would automatically be his final opponent as a wrestler. As weird as it sounds, it is what it is.