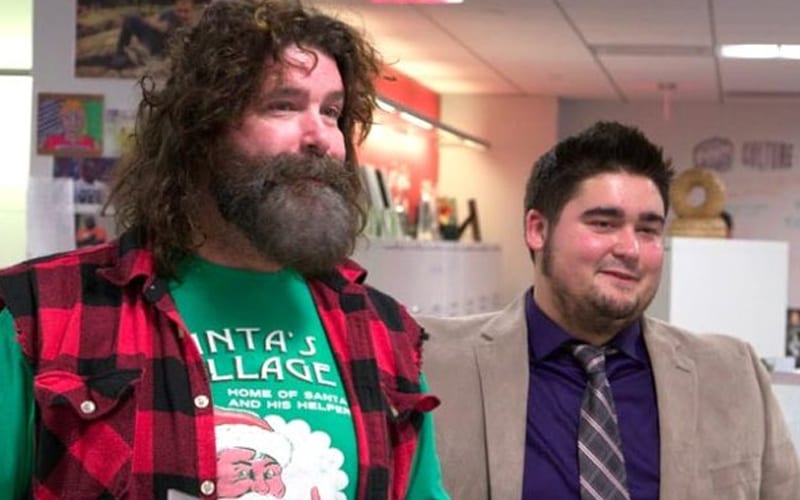 Dewey Foley started working for WWE because he had interest in the business and a father who knew who to call. His hard work has paid off as Mick Foley’s baby boy learned the ropes backstage. Now he has even more responsibility.

It is reported in the Wrestling Observer Newsletter that Dewey Foley is now one of the “key creative forces” behind 205 Live. Adam Pearce is the other name mentioned. Pearce has worked very closely with 205 Live for a while.

In a December 4th, 2015 Facebook post, Mick Foley made it very clear that WWE hiring his son would not change his commentary on the product.

Here is the truth. My son was hired two months ago by WWE creative, and will begin working with the company in January. He would have started earlier, but he and I both felt it was important for him to fulfill the commitment he made to the college that employed him as the director of a residence hall. He could have merely explained that this was his dream job, and possibly a once-in-a-lifetime opportunity, but he chose to stay because it was the right thing – and because I told him that deep down, Mr. McMahon would respect him as a man of his word. My son was not given this job because of his last name. He earned it. He earned it by working for hundreds of hours in solitude, with no compensation, to prove his writing skills and mind for the business. There are no piece-of-cake jobs in WWE. As ESPN’s Jonathan Coachman said of his time with WWE, “you are expected to bring it every day.” My son will do his best to “bring it” every day. He will be working long hours, in a thankless, difficult job, for entry level money – the way it should be. There has also been talk of my daughter joining WWE as a backstage interviewer. I certainly hope that turns out to be the case – but as of now, as far as I know, it’s just talk.

The hiring of my son in September by WWE has had no bearing on any of my posts about the company – be they negative or positive. I am both puzzled and insulted to think that some wrestling fans have become so jaded and cynical that they could read a few of those heartfelt Facebook posts or listen to my podcast with stone cold Steve Austin, and doubt the sincerity of my words. Not everything – in wrestling or life – is an angle, or a work.

Dewey Foley started with WWE in 2015. He has also been featured as Mr. Bootyworth in the New Day skits. Obviously, his creative energy is now being utilized in a much more important role backstage. His father is probably very proud of him as well.