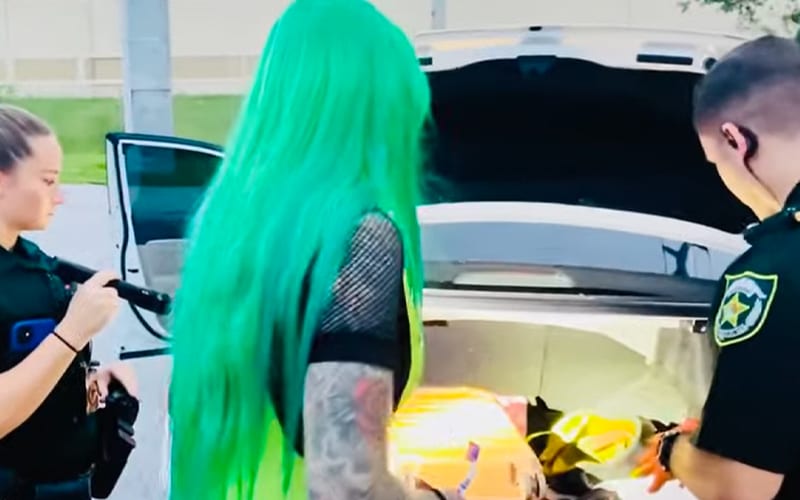 Shotzi Blackheart had awful news to report when her car was stolen. On top of that, her gear bag was in the trunk. That meant her gear was stolen along with her signature entrance horned helmet and jacket. Things are much better now.

Blackheart kept fans updated about her situation. This was awful, but she received a ton of support. The green-haired NXT Superstar had much better news to report later because they found her car!

In a recently uploaded video, Shotzi says she was in the middle of brushing her teeth when she got a call saying that the police found her car. Jake Atlas drove her to see if her helmet was still in the trunk.

Shotzi Blackheart was in her wrestling gear when she showed up to the scene. She was about to wrestle at Full Sail. She still had her tooth brush in her hand as well. Shotzi told the police that she doesn’t even care about the car, she just wanted to see if her helmet was in the trunk.

When the moment of truth came, Shotzi Blackheart was so happy she almost cried. She didn’t notice anything was even missing from the trunk. She was so happy to have her helmet back it was hard to control her emotions. She called it “the greatest love story ever.”

Shotzi Blackheart’s car was a little smashed up, but her helmet was there. That helmet has a lot of sentimental value as she told her story to the police officer. Her helmet was hanging on the wall of the training facility when she learned to become a pro wrestler. When the time came for her to wrestle, they gave it to her. It’s been with her for her entire career and it’s been all around the world with her.

Shotzi got her stuff back, and left her car for the police to deal with. Then it was time to get back to Full Sail because she had to wrestle and didn’t plan on doing it without her helmet.