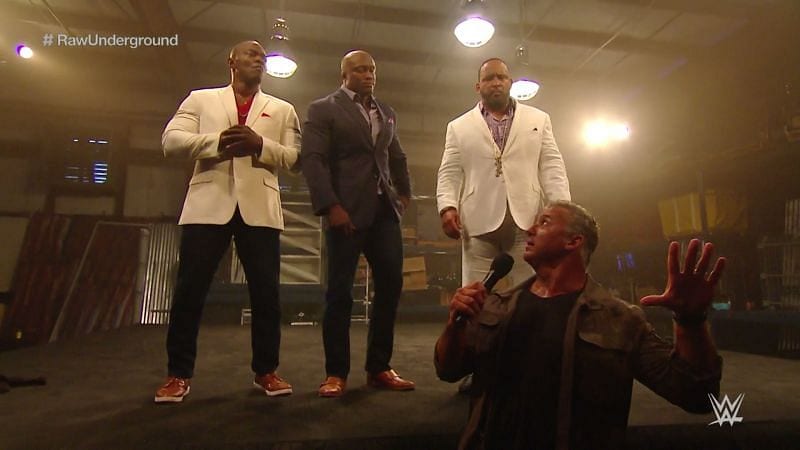 In the very first episode of RAW Underground, The Hurt Business decimated the competition and claimed their turf. The faction was absent from the segment this week but they can always come around and destroy people when they like.

In an interview with Newsweek, Hurt Business leader MVP revealed their reaction when Shane McMahon first pitched the idea for the segment to them.

MVP said that just like the fans, the idea was shocking to them as well. However, after hearing what McMahon had to say, they found the idea pretty cool.

It was a shock for us, too. Shane McMahon explained to us the concept of what they wanted to do and I thought, “Wow, that’s pretty cool,” and you know, we’re all competitive athletes in combat sports so it was like, “Yeah, OK, that’s right up our alley.”

MVP said that RAW Underground has received pretty good feedback from the audience. He also said that something new takes it’s time to grow on audience so the ones who didn’t like could come around eventually.

Creatively it was just go in there and beat people up and that’s what we do. We did and it worked out wonderfully and we’ve gotten a lot of positive feedback. Overall, the reaction to RAW Underground has been favorable and, of course, the Hurt Business going in there and wrecking shop, that’s also been pretty favorable. I’m stoked. I’m excited to see what happens with RAW Underground going forward because it’s just a different sight with a different flavor, different vibe and it seems pretty cool. I think people who weren’t initially sold on it, I think anything that is new sometimes takes a little getting used to. I liked it right away.

This week’s RAW Underground featured another NXT Call-up causing mayhem and Shayna Baszler became the first female Superstar to participate in the segment. In the coming weeks, we might see more new faces making their way to RAW Underground as well.