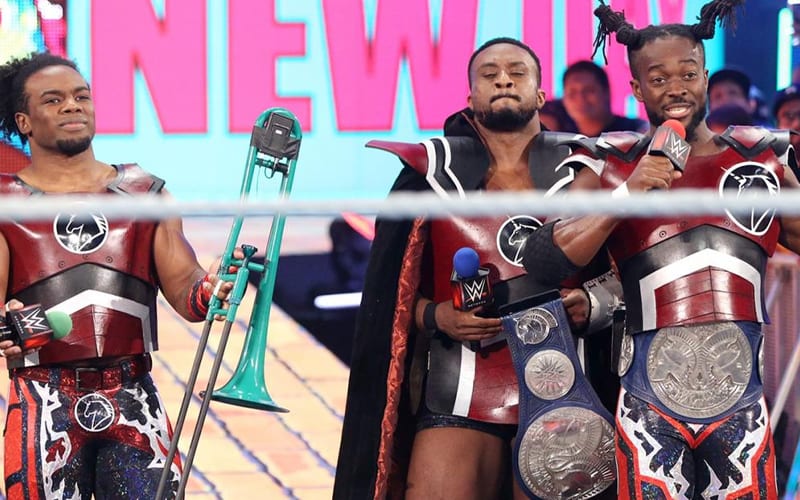 The New Day have been through many wars in WWE, but their battles with the Usos are also legendary. One year WWE didn’t think that rivalry deserves to be on the SummerSlam main card, so the Usos and New Day decided to prove them wrong.

During his appearance on WWE The Bump, Big E discussed SummerSlam 2017 when they were told that their match didn’t make the main show. This was a big shock for everyone involved.

Big E said that they all just looked at each other and knew what they needed to do. So, they went out there to make sure their match wasn’t on a kickoff show again.

“I will say that one that stands out in my mind is when they had the gall to put us on the kickoff show with the Usos when we were in the thick of our rivalry — we were in the meat of this thing and when we heard it, all of us looked at each other and said, ‘What?! The kickoff?!'”

“Just knowing that we were all on the same page like, ‘you know what? We’ll show them. You won’t ever put us on the kickoff again. How dare you, you go steal this show! So our goal was to have the best match of the whole night. That’s our mentality. So that’s what stands out to me when they had the gall to put us with the Usos on the kickoff — one of the greatest teams of all time, our greatest rival and that was an incredible match and we did our thing.”

The New Day and Usos stole the show at SummerSlam in 2017, and their match was on YouTube for free. You can check out that match below to see how incredible it was. That was also a time when WWE probably learned that it doesn’t matter where they place the New Day on the card because they’re going to bring it no matter what.