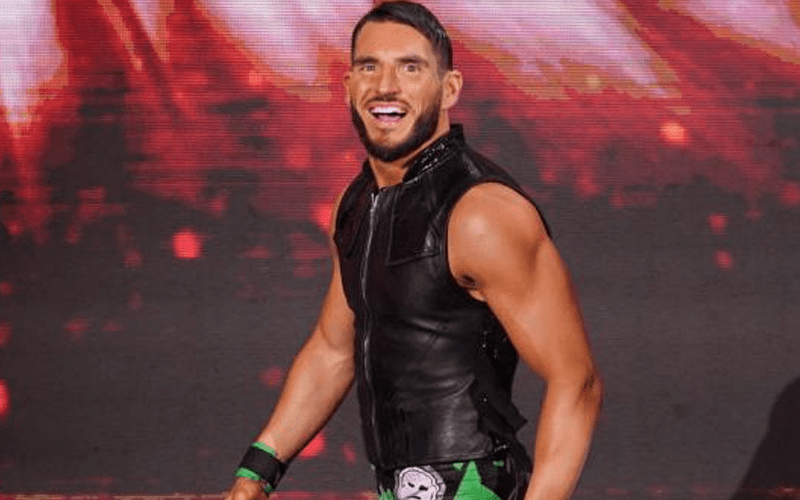 Johnny Gargano and his wife Candice LeRae have been teaming up together in recent weeks. The couple has had tag team victories over Keith Lee & Mia Yim and continue to help each other out with their respective programs.

In a recent interview with TV Insider, Gargano was asked to share his thoughts on teaming up with his wife Candice LeRae. Gargano said that they’ve never been truly paired together as an official act in the past.

He said that he feels like now they’re finally getting a real chance to work together. However, Gargano said that this could be hindered in the future if the couple decided to have a child together.

He said that LeRae won’t be able to wrestle when she’s pregnant and the same happened in Becky Lynch’s case. He then said that he’d love to get pregnant so that his wife could wrestle while he stayed at home.

However, that is simply not possible and he said that they’ve had a discussion about this in the past. Gargano revealed that he doesn’t know if LeRae would even want to continue wrestling after giving birth and therefore, they took the opportunity to team up together while they had it.

He said that they took this act up as a final go where they could work side-by-side because the future is uncertain and there’s no telling if they can do it again.

It has been something we’ve talked about for a while. We’re always kind of paired together, but not really. We kind of had on the indies a little bit, but we were never officially together as an act. I feel like now we’re getting that chance. Just from the real side of things, the fact is eventually we are going to have a child whenever that may be. When it happens, unfortunately, the way things work out Candice would not be able to wrestle while she is pregnant. That’s just the way things go. You see what happened with Becky [Lynch] and women in general. I would love if I could get pregnant. Candice could keep wrestling and I’d stay home and it’d be great.

The fact is Candice won’t be able to wrestle for that time period. In all honesty, when Candice becomes a mom she isn’t even sure if she would come back. We’ve discussed this. So we wanted to take the opportunity while we had it to work together, to have one final go for both of us as an act. We wanted to be together side-by-side because who knows if we’re going to again.

Currently, both the Garganos are in good spots within NXT. But in the future, things could change again for them if they decide to have a child together.