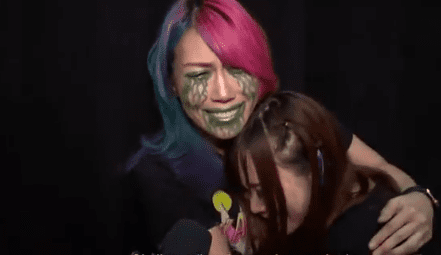 This past week, after making her final WWE appearance on Monday Night RAW, Kairi Sane departed the company, and is she headed back to Japan. The company gave the former NXT Women’s Champion a farewell and wished her the best on her next voyage.

Both Asuka and Sane teared up while bidding each other goodbye. Asuka told Sane that she will really miss her company in WWE and that she was lonely before Sane came to the main roster.

It seems like Sane’s WWE departure has seriously affected Asuka. The Empress of Tomorrow has been looking for Kairi Sane and even took to her Twitter to ask where her tag-team partner was.

Unfortunately for Asuka and the WWE Universe, it seems like we won’t be seeing a Kabuki Warriors reunion anytime soon.

Are you missing Kairi Sane like Asuka? Let us know in the comments below!!!