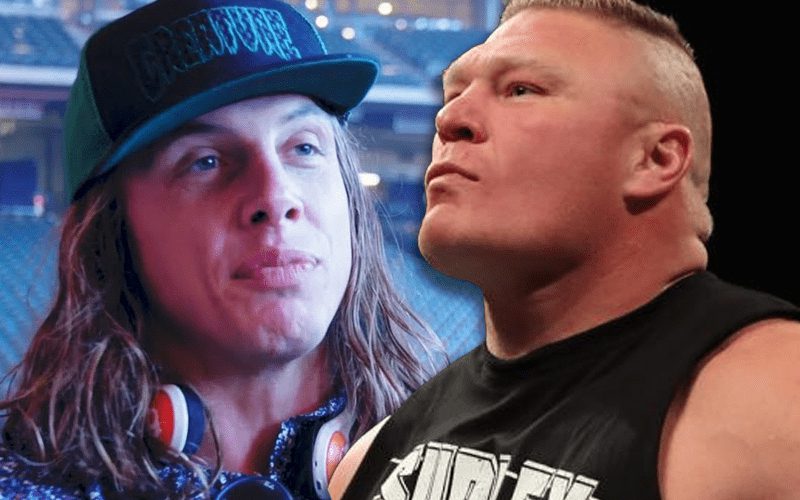 Matt Riddle is a different breed of WWE Superstar. There has never been another one like the Original Bro, and there won’t another after him. His attitude and natural charisma might rub some people the wrong way. This is apparently the case with Brock Lesnar.

Corey Graves had a chance to speak with Matt Riddle during After The Bell. This was an interesting conversation that included Brock Lesnar eventually. He said that Lesnar doesn’t like him, in fact, he said: “I think he really hates me.” Riddle is okay with that because he’s gotten heat before.

No heat against Matt Riddle will cause him to stop trying his best to achieve whatever he can in WWE. A match against Brock Lesnar might be preferred, but The King Of Bros has dealt with everything already and he hasn’t gone away yet.

“I’ll be honest with you.  The guys has it all.  I think he’s taken my comments as like, literal disrespect. I think he really hates me.  Which, hey, ok.  I get it.  I rubbed you the wrong way.  I told everybody that I get it, I’ll stay away.  I won’t call people out anymore.  I won’t call these people out anymore.  I’m not going to go away.  I’m going to make myself valuable enough to where the money is on the table.  I know I can do that.  When I first started wrestling, when I sold the house and everything, people would ask me what is my goal for wrestling.  I would say that I like to set goals that are almost unattainable because in the process of trying to get to that goal, you’re probably going to be great in the process.  So they asked, what’s your goal?  I want to retire the Undertaker and I want to retire Brock Lesner.  Brock, nothing but the utmost respect and I think my words were taken as disrespectful which is fine, but at the end of the day, I just know what I have to do.  I need to make myself valuable enough to get in the ring with him and I hope I can do it.”

Brock Lesnar didn’t like hearing that Matt Riddle was calling him out on social media. This caused him to have a little conversation with the Original Bro prior to the Royal Rumble.

Matt Riddle might make his name valuable enough that he can someday easily claim a spot against Brock Lesnar without anyone pushing back to say he hasn’t earned it yet.