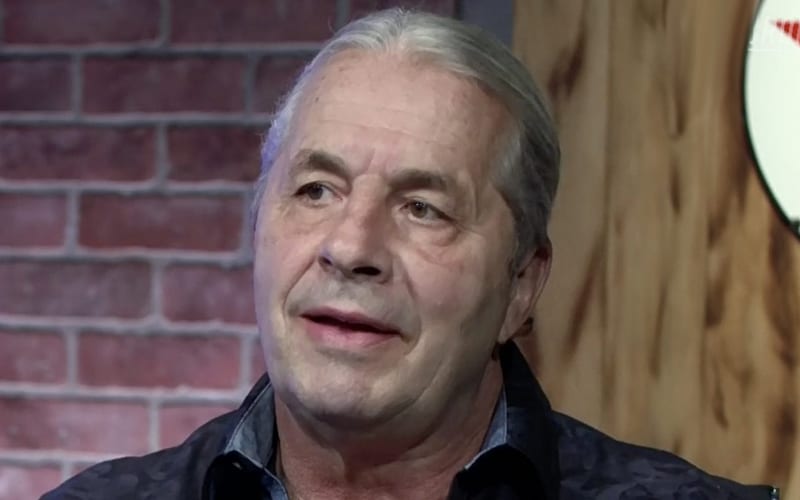 Bret Hart encountered plenty of passionate fans during his career. One specific fan still stands out for him because of her dangerous and obsessed actions.

During his Confessions Of The Hitman series, Bret Hart revealed a story that he has never told before about a stalker. This was near the end of his pro wrestling career and he had a female stalker that he described as “psychotic.”

Death threats were sent to him and he received threatening messages on his voice mail machine as well. She called herself “The Nasty Girl” and proceeded to stalk and taunt The Hitman even after his concussion.

They eventually had an encounter and the stalker was taken to jail. This was certainly a nerve wracking situation for The Hitman at the time.

“There was one girl near the end of my [professional wrestling] career when I had the concussion injury, she was totally nuts and psychotic. And she made me death threats for quite a few weeks, and [was] telling me she’s going to kill me and stuff. And I didn’t know who she was or what she looked like. I just kept getting these voicemails on my machine. In her mind, I guess she thought I was seeing her or I promised I’d see her after my match. I never talked to her or that kind of thing. She had all these delusional thoughts about me and her. And, of course, I would stand her up. I guess because I wouldn’t show up at these things. It was probably Owen [Hart] calling her or something! I found that she was becoming more of a problem when I got concussed. I got hurt, and I remember getting to my [hotel] room. I had a voicemail from her. She called herself ‘The Nasty Girl’. That was sort of her name or her handle. And she was totally crazy.”

“I didn’t know what she looked like. It turns out she was a black girl, a heavy black girl. And I remember winning the title in Toronto [Canada] for WCW. I won the world title against Chris Benoit and it was a big celebration, a big night for me. The next night, we had [WCW Monday] Nitro in Detroit [Michigan] because it’s only a half-hour, forty-minute flight. I flew to Detroit, and when I got off [the plane], I was taking the moving sidewalk to the baggage claim and I pass this black woman that passed me on the belt. Like, I was going one way and she was going the other. But I remember we just stared at each other. I was staring at her, locking eyes on her, ‘why is this girl staring at me with such [a] glare?’ And she passed me and I remember we just kept staring at each other. Then I thought nothing of it after that. I just thought, ‘I wonder what her problem was. Maybe she recognized me from TV or something. I don’t know. I had been a bad guy a couple of times.’ But anyway, she left me a message that night in my hotel room, saying that she saw me at the airport and from that moment on, I said, ‘I think I know who she is.”

“When I flew into Buffalo [New York], the car rental place was across from departures, like right across the sidewalk, really about 30 feet. As I was getting my car, when I was filling out the paperwork and stuff, I remember looking and she was across behind a pillar, across the street, and she kept peeking from behind the pillar. And I caught her and I said, ‘that’s that psycho.’ She didn’t know that I had seen her. It was pretty serious stuff and I remember WCW did nothing, like zero. And I remember, I said to the girl at the counter, I said, ‘have you ever seen a real stalker?’ She goes, ‘no, I haven’t.’ I said, ‘there’s one right across the street right now looking at me’, and she looked back and she saw her peek out from behind the pillar. And she goes, ‘you’re not kidding, are you?’ I said, ‘I’m not kidding.’ So she goes, ‘do you want me to call the police?’ And I said, ‘please call the police. Please. This is not kidding around stuff. This is really serious.”

“So she called the police and three policemen came up to me. They were [all] fans or friendly to me. They said, ‘what’s going on?’ I said, ‘there’s a girl’. And I remember she did the same thing, peeked from behind the pillar, and they saw her and they go, ‘okay, we see her.’ And I said, ‘she’s a nut. She’s following me around and she [has] made a lot of threats to me.’ I told them what happened. They said, ‘we’ll go and talk to her’ because I wasn’t 100% sure it was the right girl.” Hart added, “Two cops walked me to my car and one cop said he’s going to go over and check her out and investigate, get her ID, and get her story. And so I left. They walked me to my car, I drove to my hotel. Maybe about 10 minutes after I got to my room, they called me from the lobby and told me that the girl tried to attack the policeman [with a knife] who walked over, and they wanted me to come and fill out a statement in support of the policeman,” Bret continued. “I would never have to come back to court, which I didn’t have to. This would all be backup support evidence for the [officer]. So, they arrested her and took her to jail.”

Bret Hart was tackled during the WWE Hall Of Fame last year while he was accepting an induction for the Hart Foundation. That wasn’t the first time that Hart had a dangerous interaction with a fan. Thankfully, he was able to escape both situations without any further incidents.